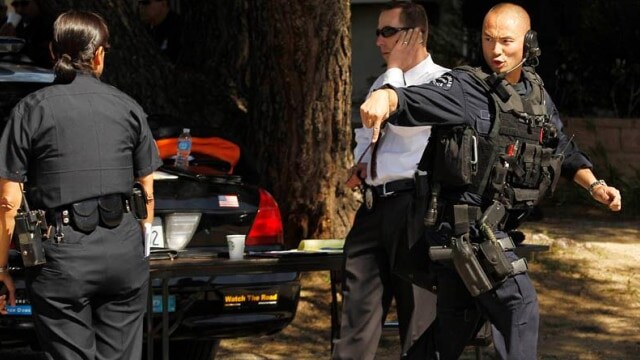 Under a new law signed by the President this month, local law enforcement agencies can apply for grants for active shooter training under a long-standing DOJ program. (Photo: Los Angeles Police Department)

The Protecting Our Lives by Initiating COPS Expansion (POLICE) Act was introduced in April by Senate Republicans who quickly landed support from across the aisle that led to passage by that body on a voice vote in May, and was approved without amendment in the House earlier this month. President Obama signed the bill without comment on July 22.

“We need to do all we can to ensure our law enforcement and first responders are equipped with the necessary tools and training to safely and swiftly resolve these dangerous situations,” said Iowa Republican Chuck Grassley in a statement.  “The POLICE Act boosts active shooter training for police and other first responders who are quick to run toward a crisis when others are running away.”

The legislation, S.2840, amends the Safe Streets Act of 1968 to allow the U.S. Department of Justice’s Office of Community Oriented Policing Services (COPS) program to use federal funds for active shooter program. Such programs are very popular with departments and agencies across the country but are typically funded through local outlays.

The COPS program, established in 1994, has provided $14.9 billion in federal assistance to state and local agencies to hire officers and establish pilot programs to fight gangs, secure schools, fight sexual predators, and transition military veterans to law enforcement careers. In all, some 13,000 of the country’s 16,000 law enforcement agencies have utilized COPS at one time or another.

The program was initially well-funded, reaching a height of $1.63 billion in 1998, but has since plateaued and the DOJ has trimmed its outlay over the years until by 2012 appropriations dropped to a comparatively paltry $198 million. The 2017 funding request topped $286 million with the vast majority of that amount earmarked to assist in hiring additional law enforcement officers at the state, local and tribal level.