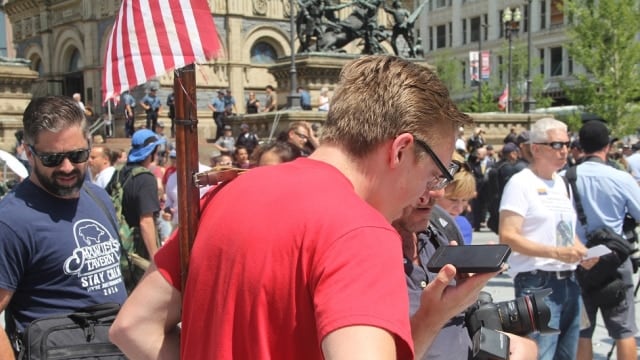 The only open carrier Guns.com bumped into at the RNC had a Mosin-Nagant with an American flag muzzle crown. (Photo: Daniel Terrill/Guns.com)

After petitions and statements by some seeking to bring their firearms to the Republican National Convention and others pressing to ban guns in Cleveland, the outcome was largely anticlimactic.

As far back as March, advocates wanted to be able to bring their firearms under Ohio’s open carry laws to the RNC, noting that the Quicken Loans Arena is a gun free zone. A Change.org petition calling out the Republican National Committee while pushing the Arena to reverse their policy on firearms carry on their property for the event gained over 50,000 signatures before it came to light that it had been started by a Democrat who volunteered for the Obama campaign in 2008 and supports Hillary Clinton to replace him.

Nonetheless, the Secret Service let it be known that, under U.S. law, they had the authority to prohibit firearms from entering sites under their protection and planned to enforce that discretion as Congress allocated $50 million for increased convention security and Cleveland police purchased new riot gear, expecting the worse.

Then came news that several hundred members of the New Black Panther Party were expected to turn out for a rally in Cleveland just ahead of the RNC and intended to carry firearms under Ohio’s open carry laws while the Southern Poverty Law Center cautioned the Oath Keepers also planned to attend the event – possibly with guns.

Nonetheless, the president of the Cleveland Police Patrolmen’s Association, Steve Loomis, asked Ohio Gov. John Kasich to suspend the practice of open carry through an executive order on July 17.

“It’s irresponsible of those folks — especially right now — to be coming downtown with open carry ARs or anything else. I couldn’t care less if it’s legal or not,” said Loomis.

Kasich for his part said that neither he – nor any other governor – had the “power to arbitrarily suspend federal and state constitutional rights or state laws as suggested,” and took no action.

In the end, there was at least some lawful open carry outside the convention, with the Bloomberg-funded journalism start-up The Trace running into a group of West Ohio Minutemen who, when asked why they attended while armed, answered simply: “Because we are free.”

Guns.com, who spent the week at the event only found one open carry practitioner, a young man in sweat pants with a Mosin-Nagant bolt-action rifle and a “Someone Loves me in Liberia” T-shirt.

“We have always said that the people who are legally carrying are never the problem, and this event proved just that,” Ohio Carry President Brett Pucillo told Guns.com. “The world thought there would be blood in the streets, and Cleveland proved them wrong and is now a shining example of how a convention should be handled by a city.”

According to city officials, there were only 24 total arrests during the convention. The majority of those arrests, as noted by the Cleveland Plain Dealer, came during a flag burning staged by the Revolutionary Communist Party.

In contrast, during the 2008 Republican National Convention at the Xcel Energy Center in Saint Paul, Minnesota, more than 300 were arrested on the first day alone.

Pucillo said the peacefulness of the more recent convention was a testament to the Constitution in action.

“It was great to see people exercising their rights peacefully in Cleveland,” said Pucillo. “Both first and second amendment rights were displayed proudly and without incident. We would like to thank the Cleveland Police Department for their professionalism throughout the entire event.”

Guns.com reached out to both Cleveland’s convention committee and the police department to find out if any of the 24 arrests were for weapons charges and will update this article once comment is received.

Jared Morgan and Daniel Terrill contributed to this article.