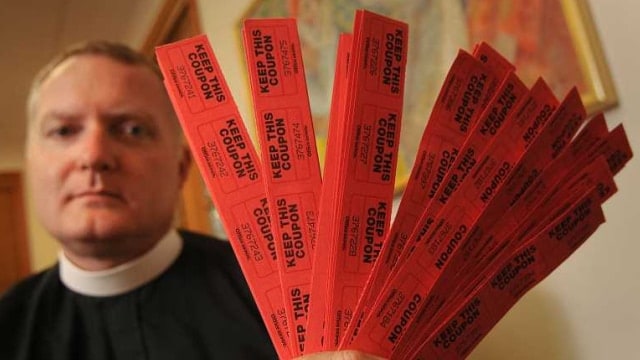 A priest coughed up $3,000 in a charitable raffle so that the AR-15 would not get a chance to run free and “be used to kill kids in schools, kill people in a movie theater, kill people at an office party or at any other place of mass shootings.”

Yup. A local girl’s softball team needed cash to make a trip to California and one of the coaches put up an AR-15 for raffle to generate the needed funds.

As reported by the Lake Oswego Review which covers the city of the same name just outside of Portland, Oregon, one man ponied up $1,400. But wait, Rev. Jeremy Lucas of Christ Church Episcopal Parish in Lake Oswego went all-in on the raffle madness and showed just how deep his own love for the community was by throwing $3,000 in the plate, coming away with the lucky ticket.

While it’s all for a good cause, the good Rev. Lucas wants to make a statement by vanquishing said black rifle by working with local artists to melt it down and turn the scrap into some sort of art piece.

Lucas says what he did is a symbol.

“It’s a small, symbolic act,” he says. “There are millions of guns, I know that. But this gun will never be used to kill kids in schools, kill people in a movie theater, kill people at an office party or at any other place of mass shootings. This gun will never be found by a child who accidentally shoots a friend, or accidentally used by a police chief who’s had too much to drink at a barbecue and shoots a friend.

“It won’t be used by a vet with PTSD to kill himself — that happens once every hour, and having guns available makes it a quick-and-easy solution,” Lucas says. “It will never be stolen and used to commit a crime or used to threaten a family in a domestic violence situation. If I had the chance for $3,000 to keep any of these things from happening — even one time — I’d do it again in a second.”