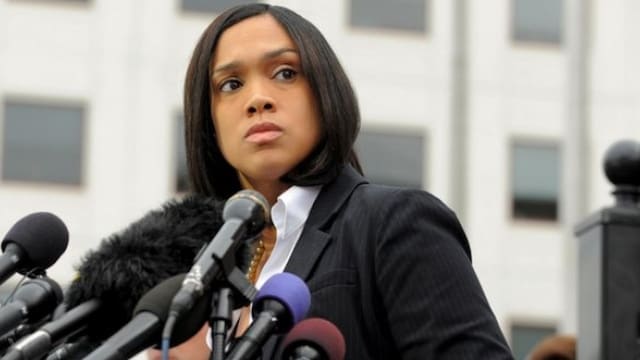 With half the officers brought up on charges already acquitted, State’s Attorney Marilyn Mosby this week dropped the charges on the other half. (Photo: Baltimore Sun)

Although State’s Attorney Marilyn Mosby stands by assertions that Gray’s death was a homicide, on Wednesday prosecutors dropped all charges against the remaining three officers under scrutiny.

The announcement closes the books on the the April 19, 2015 death of Freddie Carlos Gray, Jr., 25, who had been in a coma after being arrested by Baltimore Police the week before following a “rough ride” in a prisoner van. Following that incident, six officers were placed on leave as Mosby sought criminal charges against them after Gray’s death resulted in a series of violent riots in the city.

While the city reached a $6.4 million settlement with Gray’s family, prosecutors brought the accused officers through the judicial process, with Officer Edward M. Nero, found not guilty in March and van driver Caesar Goodson likewise cleared in June. Lt. Brian Rice was acquitted of all charges earlier this month, leaving Sgt. Alicia D. White and Officers Garrett E. Miller and William G. Porter to have their charges dropped on July 27.

Though unable to obtain convictions, Mosby has not changed her mind as to the nature of Gray’s death.

“We do not believe that Freddie Gray killed himself,” said Mosby during a news conference in Gray’s neighborhood in West Baltimore, in front of a mural painted in his honor. “We stand by the medical examiner’s determination that Freddie Gray’s death was a homicide.”

Baltimore’s Mayor, Stephanie Rawlings-Blake, who is the Secretary of the Democratic National Convention, said that the announcement was not surprising but defended Mosby.

Baltimore Police Lt. Gene Ryan, the union president for Fraternal Order of Police Lodge 3, which paid for the officers’ legal defense said, “Justice has been done,” and called for the six to be returned to duty. Ryan said Mosby “had her own agenda” when it came to bringing the officers up on charges.

At least five of the six officers have filed lawsuits against Mosby and Baltimore County.

"We stand by our decisions and charges. We stand by the medical examiners determination that Freddie Gray's death was a HOMICIDE."