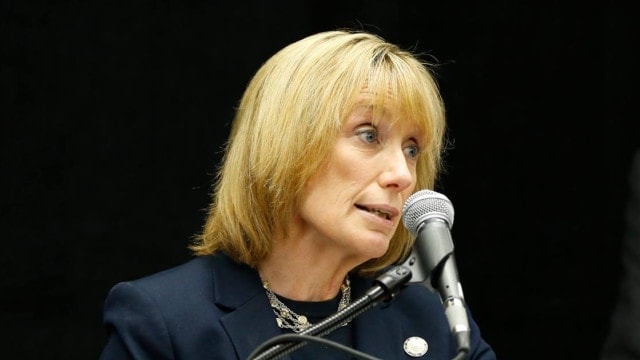 Despite assurances from Gov. Maggie Hassan that the expansion would strip gun rights from a small segment of the population and is in line with federal law, New Hampshire’s judiciary isn’t signing on. (Photo: Gov. Hassan’s Office)

New Hampshire’s judges are refusing to comply with a directive from the state attorney general to report the names of some with mental illnesses to a federal database of prohibited gun possessors.

In March, New Hampshire lawmakers approved an expansion of the state’s Health Protection Program that accommodates some 45,000 residents ineligible for health insurance marketplace subsidies and traditional Medicaid coverage. The bill, HB 1696, was approved by a Republican-heavy 216-145 vote in the House and 16-8 in the Senate with specific language that noted no person, organization, department, or agency in the state could report a person to the FBI’s National Instant Criminal Background Check System (NICS) as a “mental defective” unless it came as part of a court order.

New Hampshire currently reports very few individuals to database for mental health issues, with only two records on file for that reason in 2015.

Nonetheless, after Gov. Maggie Hassan signature on the measure in April, New Hampshire Attorney General Joseph Foster — a fellow Democrat who was appointed by Hassan — sent a letter to the New Hampshire Judicial Branch earlier this month advising the court to begin reporting those with mental health issues to NICS. Among the parameters for reporting included any time a person was found incompetent to stand trial, involuntarily committed to a mental health facility or found not guilty by reason of insanity.

Notably, Foster’s directive did not outline possible methods to remove a person from the list, which would in effect create a lifetime firearms ban.

“This is something that has been in federal law, and many, many states already do so,” Foster said, as reported by local media. “So in effect, it’s really just complying with federal law.”

This shocked the Republican lawmaker to behind the NICS language in the healthcare package, Rep. JR Hoell, who argued his goal was to keep people with mental illness from getting into the database in the first place

“I am appalled at the misinterpretation,” Hoell told the Concord Monitor. “The (NICS) list is about those who are criminals, not those who are mentally disabled.”

Hassan, who has a record of being tough on guns and is running to unseat Republican U.S. Sen. Kelly Ayotte in a tight race, immediately issued a statement praising Foster’s interpretation of the healthcare program while cautioning that few people would have their gun rights restricted.

“In keeping with the federal law, this policy does not apply to the vast majority of people who experience mental illness, and we remain committed to preventing the stigmatization of those with mental illness and helping them access appropriate treatment,” she said. “At the same time, this common-sense step will help prevent those who are a danger to themselves or others from purchasing firearms, strengthening public safety.”

However, the American Civil Liberties Union and the Disabilities Rights Center-NH disagreed with Foster’s position, which could result in as many as 300 residents to be reported immediately, and told the courts as much in letters of their own.

This led Judicial Branch Chief Counsel Howard Zibel last week to write Foster, under advisement from New Hampshire Supreme Court Chief Justice Linda S. Dalianis, that the law cited by the AG was “not sufficiently clear on its face for the judicial branch to begin the reporting that you request.”

Zibel went on to state that should Foster disagree, he was “free to bring an action seeking a judicial determination.”

Deputy Attorney General Ann Rice told the Union-Leader that, “We are reviewing our options at this point.”