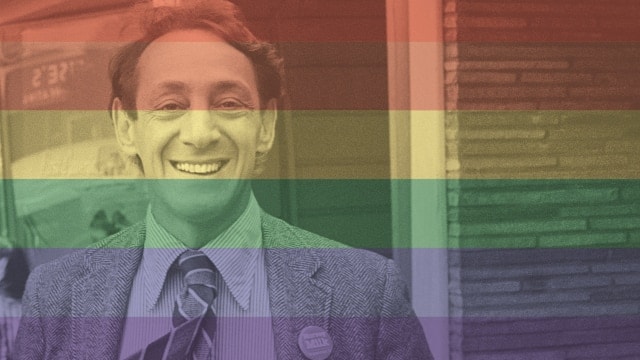 Long before his assassination in 1978, Milk was a diving officer during the Korean War on the submarine rescue ship Kittiwake

The Secretary of the Navy is set to name an upcoming fleet oiler after gay rights leader Harvey Milk, joining the same fleet that will include the USS Gabrielle Giffords and USNS John Lewis.

Before his election to the San Francisco Board of Supervisors in 1977– the first openly gay person to be elected to public office in California– Milk had served in the Navy during the Korean War.

Since becoming the 75th Secretary of the Navy in 2009, Mabus has broken with Naval tradition several times in his discretion for naming warships and naval vessels. In 2010, he named the amphibious transport dock ship USS Murtha (LPD-26) after Democratic Congressman John Patrick Murtha, while all of the other vessels of the class were named after cities.

He followed this up in 2011 by naming two Lewis and Clark-class dry cargo ships, traditionally named after explorers, after civil rights leaders Cesar Chavez and Medgar Evers.

In 2012, Mabus named a vessel in the Independence-class of littoral combat ship, which carry the names of small cities, USS Gabrielle Giffords (LCS 10).

Earlier this year, Mabus took the unusual step of naming the lead ship of the new fleet replenishment oilers (T-AO 205) after sitting Georgia Congressman John Lewis, a Democrat with a long history in the civil rights movement and a proponent of gun control measures.

Whereas most oilers have traditionally been named for rivers and streams with Native American names or for ship designers, Mabus announced,  “The John Lewis-class the naming convention will be people who have fought for civil rights and human rights in this country.”