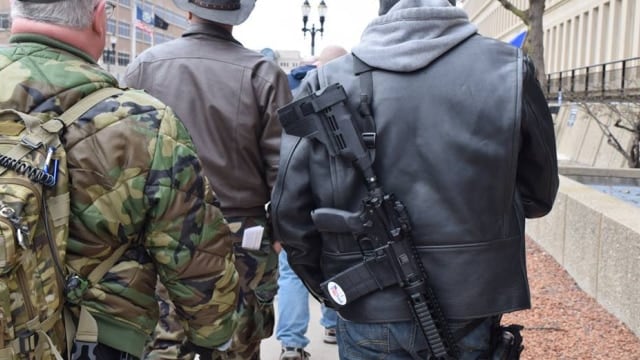 With the ability to openly carry handguns taking effect this year, some in the law enforcement community are asking lawmakers to take a harder look at the practice after a deadly shooting.

In 2015, Gov. Greg Abbott signed an expansion of open carry which allowed those with a concealed carry permit to carry a visible handgun in public. The law quietly took effect earlier this year, over the protest of some large urban police chiefs. Prior to this, the right to open carry of long arms such as rifles and shotguns was codified under state law even without a permit and remains an option.

Now, in the wake of an ambush shooting of police that left five dead in Dallas, some in law enforcement are taking aim at the practice.

In the aftermath of the incident, Dallas Police Chief David Brown expressed that upwards of 30 people carrying legal rifles during the active shooter incident complicated the police response, though the city has been in the forefront of open carry education.

“We’re trying as best we can as a law enforcement community to make it work so that citizens can express their Second Amendment rights,” Brown said. “But it’s increasingly challenging when people have AR-15s slung over their shoulder and they’re in a crowd,” he said. “We don’t know who the good guy is versus the bad guy when everyone starts shooting.”

While Brown has not called to chill the law, others are.

“I think these folks with the long guns, with rifles slung over their shoulders, that is of concern of me,” said Brazos County Chief Deputy Jim Stewart, who feels the law should focus on the carry of handguns. “They’ve been able to do that for years, but particularly as we experienced in Dallas where the shooter was shooting with a long gun, how are they to know who the shooter actually was when you have so many people going around with long guns?”

The Combined Law Enforcement Associations of Texas, the largest police officers’ union in the Lone Star State, said they won’t push for a blanket repeal of open carry, but will call for more restrictions on the practice that could include licensing and training mandates.

Any push at gun control in Texas will be an uphill battle, with Republicans in control of both chambers of the legislature, a publicly pro-gun chief executive and an attorney general who aggressively seeks to enforce Constitutional firearms protections.

Second Amendment advocates aren’t so sure that open carry is a problem that needs solving.

“Texans have been open carrying rifles — at protests and elsewhere — since we became an independent nation in 1836,” Open Carry Texas President CJ Grisham told Guns.com.

Grisham feels that open carry was scapegoated in the aftermath of the Dallas shooting.

“Anti-gun police chief Dallas Police Chief David Brown and card-carrying member of Bloomberg’s Mayors Against Illegal Guns mayor Mike Rawlings lied to Texans and the American people after the tragedy in Dallas a few weeks ago,” he said. “Open carry had zero effect on either the police response or police ability to identify the shooter. There is video after video on social media of law enforcement officers walking past open carriers before, during and after the shooting who had no problem telling the good guys from the bad.”

Grisham said that if those in law enforcement hold lawful open carry as a problem and cannot properly differentiate between one and someone who poses a threat, their training is inadequate.

“The fact is that none of the cops on the scene had any problems associated with open carriers,” said Grisham “These out of touch senior law enforcement officials are, in essence, saying that their police officers aren’t smart enough to tell the good guy from a bad guy. We reject this notion on its face and the actual response is proof of this.”