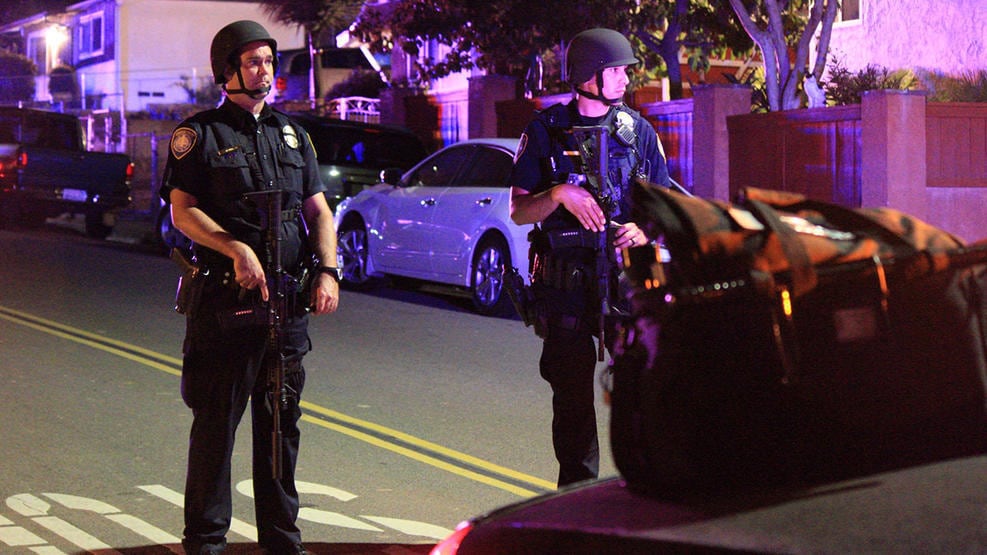 One officer was killed and another hospitalized after a traffic stop turned deadly Thursday evening in southeast San Diego.

Though the exact details surrounding the shooting are still unknown, Police Chief Shelley Zimmerman confirmed during a press conference that the two officers were conducting a traffic stop when they were met with an onslaught of bullets.

Jonathan “JD” DeGuzman, 16-year veteran of the force, suffered multiple gunshot wounds. He was transported immediately via police car to Scripps Mercy Hospital in Hillcrest where he later died from his injuries. Wade Irwin, nine-year veteran, also sustained injuries and was taken to UC Medical Center also in Hillcrest. Though he was listed in critical condition, Irwin is expected to survive.

Police located one suspect, Jesse Michael Gomez. Gomez was found hiding in a nearby ravine with a wound to the torso, according to Zimmerman. He is currently in critical condition, but is also expected to recover.

Zimmerman said the department was investigating other persons of interest in addition to Gomez.

Early Friday morning, SWAT officers surrounded a house in the Shelltown district of San Diego engaging in a three-hour standoff with another potential suspect. The standoff ended when officers forcibly entered the home and arrested an individual believed to be linked to Thursday’s shooting.

In a press conference Friday, Zimmerman pointed to recent data released by the National Law Enforcement Officers Memorial Fund that found a 78 percent uptick in the number of firearms related police deaths, calling the figure “tragic.”

“I can’t begin to put in words the emotions and feelings that surround an event like this. This is one of the most difficult and heart-wrenching situations for police officers to go through,” Zimmerman added.

San Diego Mayor Kevin Faulconer expressed his grief for the fallen DeGruzman in a statement published to Twitter. He also asked the community to rally behind and support its men and women in blue.

“Violence against the men and women who wear the badge is violence against us all,” the statement read. “I ask all San Deigans and all people across our nation to join together in support of our officers who courageously protect our communities. We need them and they need us.