Biggest July to date for NICS background checks to date 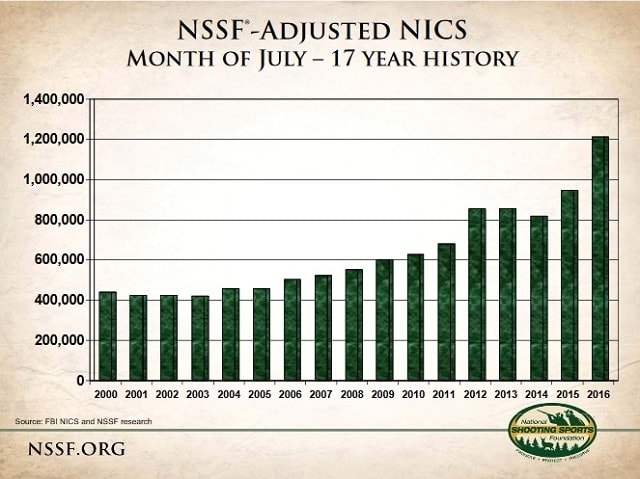 Usage data for the Federal Bureau of Investigation’s National Instant Criminal Background Check System show the largest jump for the seventh month of the year in since the system launched in 1998.

The total of 2,187,190 checks for July 2016 reflects a 37.6 percent increase from the unadjusted FBI NICS figure of 1,589,462 in July 2015. When adjusted — subtracting out gun permit checks and rechecks by numerous states who use NICS — the latest figure becomes 1,210,731, according to the National Shooting Sports Foundation, the gun industry trade organization, which is an increase of 27.9 percent compared to the July 2015 NSSF-adjusted NICS figure of 946,528.

By either figure, 37.6 percent unadjusted or 27.9 percent after adjustment, the statistics point to a market trend increase when it comes to gun sales.

The number does not include private gun sales in most states or cases where a concealed carry permit is used as an as alternatives to the background check requirements of the 1994 Brady law and allows the transfer of a firearm over the counter by a federal firearms license holder without first performing a NICS check.