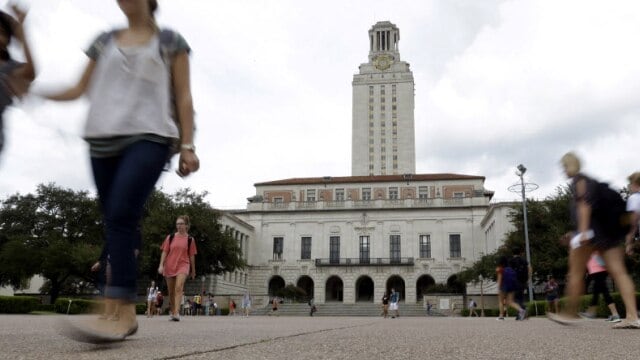 Students file past the iconic and in some ways infamous tower at the University of Texas at Austin, which will see both the solemn observance of a school shooting anniversary and the quiet implementation of campus carry on Monday. (Photo: Eric Gay/AP)

Under a new law that takes effect Monday, public and private colleges and universities across the Lone Star State could see lawful concealed carry on campus begin on the anniversary of a tragic school shooting.

Signed into law by Republican Gov. Greg Abbott last year, public post-secondary schools in Texas were required to allow at least some lawful carry on campus while granting university presidents the ability to carve out areas that will remain gun free zones. In response, schools such as Texas A&M, the University of Texas and Texas State have opted to implement new guidelines after much debate and public discourse that include, among others, restrictions on carry in student housing.

As noted by the Texas Tribune, 37 of the state’s 38 private colleges and universities have opted under the law to remain gun free zones with only non-profit Amberton University electing to allow legally concealed handguns.

Groups opposed to the practice, including Gun Free UT and the Texas chapter of Mom’s Demand Action, who were very vocal in the past several months on the issue, have been uncharacteristically silent in the past week.

Some faculty have gone so far as to file suit against their school’s new mandated policy on guns, arguing they teach sometimes volatile subjects that could led to discourse in the classroom that in turn could translate into gunfights.

One educator fears the new practice could mean dangerous students in class.

“And that’s what I fear most. Not the random gunman who busts through my door with a rifle, but the student who sits through an entire class, quietly takes out a gun and shoots me or my students,” Seema Yasmin, a professor at the University of Texas at Dallas and writer at The Dallas Morning News, noted in an opinion piece last week.

Students for Concealed Carry, a national group that has championed campus carry, holds that “licensed concealed carry will have no detrimental effect on Texas college campuses and that there is no justification to deny licensed students, faculty, staff, or guests on those campuses the same measure of personal protection they enjoy throughout the rest of the state.”

The head of SCC’s Texas chapter, Brian Bensimon, told Guns.com the right to self-defense is one of the foundations of our society.

“It is encouraging to see the state of Texas adopt a policy that has already been implemented in over 150 college campuses, and one that has worked particularly well in the states of Utah and Colorado,” said Bensimon in an email Sunday.  “Concealed carry is generally allowed in museums, movie theaters, grocery stores, shopping malls, and a whole host of places. The same right should extend to college campuses.”

The start of the latest Lone Star State gun rights expansion coincidentally falls on the 50th anniversary of the 1966 University of Texas Tower shooting that left 13 dead after a 25-year-old architectural engineering major climbed the structure and shot over 40 individuals in what has been described as the nation’s first modern active shooter event.

In commemorating the tragedy, UT will rededicate the Tower Garden, unveil a new memorial, and hold a series of events both on and off campus.

“It is unfortunate timing,” said J.B. Bird, a university spokesman, as reported by the Wall Street Journal. “These two events are completely unrelated, and we’re keeping them completely separate.”

Anti-gun groups were not impressed with the timing.

“It is disturbing to witness the new guns on campus law go into effect on the anniversary of one of the deadliest school mass shootings in American history,” Alexandria Chasse with Moms Demand Action told Guns.com in an email. “The 50th anniversary of the UT Tower shooting is a somber reminder that allowing guns on campus endangers students, faculty and staff. The implementation of this dangerous law on this anniversary is yet another example of tone-deaf Texas lawmakers kowtowing to the gun lobby and ignoring the safety and concerns of the majority of Texans including faculty, staff, campus police and students.”

Open Carry Texas pointed out the UT shooting was partially suppressed by armed students on campus who loaned cops their guns and helped pin down the shooter while it should be noted that one armed civilian, Allen Crum, a bookstore employee and veteran, helped storm the observation deck with police, ending the shooting.

Updated from the original 7:00  p.m. EST with statement from Moms Demand Action.