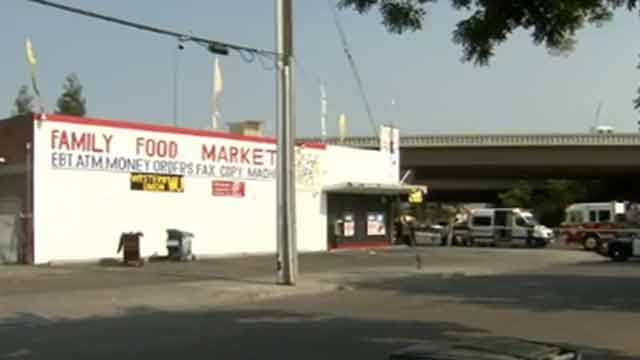 A 28-year-old parolee who was wanted by state authorities is in police custody and recovering from a gunshot wound after he attempted to rob a convenience store in Fresno, California, Friday.

The clerk had immediately recognized Marcus Hardin Hardin, who had been involved in several previous incidents at the store  including theft, when he walked through the door, explained Lt. Joe Gomez with the Fresno Police Department.

Gomez said the connection could clearly be seen on video captured by the store’s security cameras. The confrontation occurred instantly and quickly escalated to repeated threats of violence and physical acts against the clerk, whose name was not released.

Gomez told local ABC affiliate when the clerk first saw Hardin he told him something to the effect that he needed to leave, but the suspect bowed up, threw off his backpack and came at the clerk “ready to fight.” At some point, the clerk also threatened to call the police, to which Hardin responded, “Fuck the police, go ahead and call them.”

Hardin continued to threaten the clerk before spitting on him as he made his way behind the counter. Gomez described Hardin as having a much larger build than the clerk and as he closed in on him. The clerk began to fear for his safety and took action, so he grabbed a gun from behind the counter and opened fire, striking Hardin in the abdomen. The clerk then called the police, who arrived on the scene a short time later.

Hardin was transported to the hospital for medical treatment and is expected to survive. The clerk was questioned by investigators and released.

Authorities say Hardin recently served time for assault with a deadly weapon and has a lengthy and violent criminal history, and also confirmed that he’s a gang member.

Hardin and the clerk were the only ones in the store at the time of the incident and the clerk was not reported to have been injured. It’s not known if Hardin was armed.