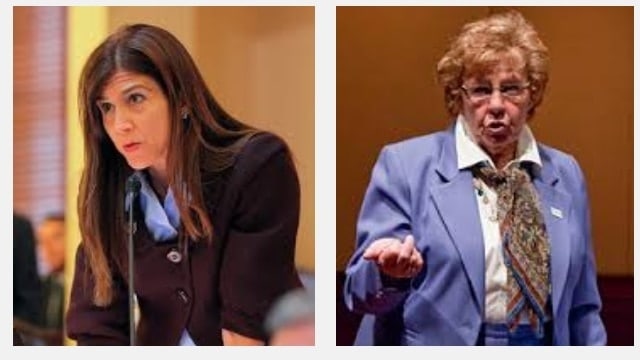 Senators from opposite sides of the aisle, Republican Jennifer Beck and Democrat Loretta Weinberg, helped push a bill to increase mandatory surrenders of guns after domestic violence convictions through the Senate this week. (Photo: Composite)

Lawmakers in New Jersey this week gave unanimous approval to a bipartisan bill that changes how domestic abusers surrender their weapons.

The measure is a push by senators on each side of the aisle to navigate a bill through to Gov. Chris Christie’s desk, who has a history of scuttling similar efforts. The bill passed 32-zero on introduction on Monday with eight senators not voting.

Sponsors of the proposal, Sens. Loretta Weinberg, D-Bergen, and Jennifer Beck, R-Monmouth, feel it enhances protections for domestic violence victims by immediately requiring that an accused abuser’s firearms be surrendered upon conviction, rather than the week they are allowed under current New Jersey law.

“For a person subject to a temporary restraining order related to domestic violence, for example, it makes no sense to give them a week to turn in their firearms,” said Beck in a statement issued through the Senate GOP. “You’re just giving them a week to do something bad. If the person is such a risk that the restraining order is necessary, the guns should be surrendered immediately.”

The bill, S-2483, changes temporary or final restraining order forms in the state to include information on firearms ownership. Going past that, it includes a mandate that those convicted of domestic violence immediately surrender their firearms while giving police the power to move to seize such firearms as well as revoke any firearm permits and cards.

Alternatively, the gun owner facing such impoundment may arrange to sell their collection to a licensed dealer. Should the convicted abuser maintain that they no longer own any firearms at time of conviction; a court can authorize a search of their home, vehicle, or business to confirm.

Gun control advocates see the bill as a win.

“This agreement is a real victory for responsibility that will make New Jersey families safer, and it represents the kind of bipartisan approach to preventing gun tragedies that our communities need,” said former U.S. Rep. Gabrielle Giffords, in a statement through her Americans for Responsible Solutions organization. “I’m grateful to New Jersey’s legislators for doing the responsible thing and voting to make the Garden State a safer place to live.”

The bill now heads to the New Jersey State Assembly where approval there would place it on Christie’s desk.

Last November, Christie rejected a similar bipartisan measure, classifying it a restatement of current laws already on the books without any improvements.

“I urge the Legislature to join with me in a bipartisan manner to broaden this bill’s approach to reducing domestic violence while simultaneously empowering victims to protect themselves through lawful means,” said Christie in a statement at the time. “Together, we can enact a more comprehensive approach and reduce the harm that domestic violence inflicts on victims, families, and our society.”

Christie proposed lawmakers add provisions to speed up the processing of firearm license applications for victims of domestic violence, enhancing penalties for those convicted of domestic violence and move to tighten up parole and probation guidelines for offenders in order to obtain his signature, items that are not a part of the current bill.

Assembly Republicans deserted their prior stand when it came to attempting an override vote and left Democrats with too few votes to muscle the law through without Christie’s signature.