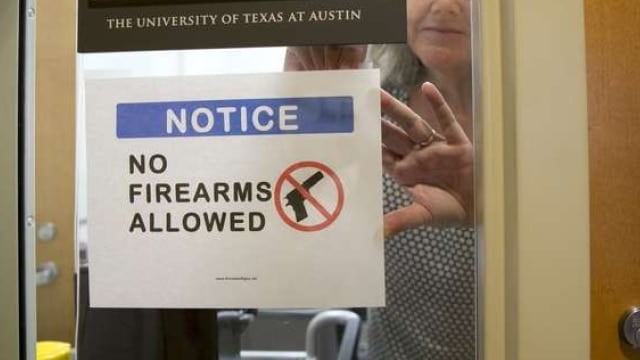 A UT faculty member posts a sign prohibiting guns at her office at the Student Activity Center on the first day of the new campus carry law Monday. (Photo: Jay Janner/The Statesman)

State Attorney General Ken Paxton this week filed paperwork opposing a lawsuit by three University of Texas professors who do not want legal concealed carry in their classes.

With the state’s new campus carry law taking effect this month, the professors kept a promise of litigation and filed suit in federal court in July seeking a federal injunction on campus carry naming Paxton, UT President Gregory Fenves and members of the school’s Board of Regents in their official capacity, as defendants.

Now it’s Patton’s turn and the Republican AG on Monday filed a 26-page brief with the U.S. District Court opposing the professors.

“It is a frivolous lawsuit and I’m confident it will be dismissed because the Legislature passed a constitutionally-sound law,” Paxton said in a statement. “There is no legal justification to deny licensed, law-abiding citizens on campus the same measure of personal protection they are entitled to elsewhere in Texas.”

The faculty members, three female liberal arts professors whose classwork sometimes touches on controversial subjects such as abortion and unwanted pregnancies, argue the carry of guns in their classes will chill discussion, thus hindering their right to free speech.

Paxton is not convinced, writing in his brief:

As such, the AG asked their request for injunction be denied.

Paxton has come out strong in support of the state’s gun laws. His office has made it easy for Texas gun owners to complain about potentially illegal gun free zones and so far this year have issued over a dozen corrective notices to towns and cities. Last month he filed suit against the city of Austin over the legality of gun free zones at Austin City Hall.

“I will always make sure that governments do not trample on the Second Amendment rights of Texans,” said Paxton, “and if they do, we will sue.”

According to court records, U.S. District Judge Earl Leroy Yeakel III, a 2003 appointment by President George W. Bush and a UT alumnus, is set to hear motions on the injunction Thursday.