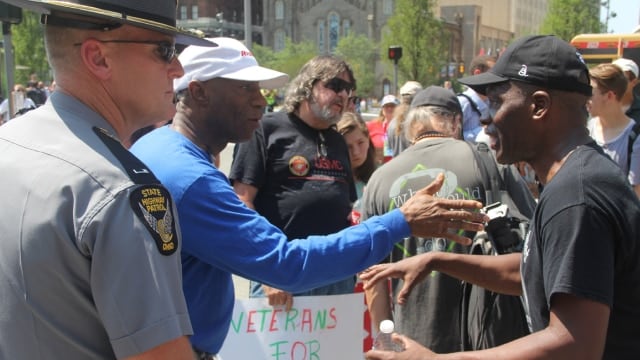 In all police reported 23 arrests at the Convention, none of which were for firearms or open carry related incidents. (Photo: Daniel Terrill/Guns.com)

In a review of arrests and police activity at the Republican National Convention in Cleveland, officials made it clear that there was little problem with guns.

The months leading up to the RNC were fraught with controversy and petitions to be able to legally bear arms under Ohio’s open carry protections at the event.

Designated as National Special Security Event by the U.S. Department of Homeland Security, federal, state and municipal police flooded the area with thousands of additional officers, backed up by allocated funds from Congress. While firearms were not permitted inside the Quicken Loans Arena itself due to Secret Service restrictions, they were allowed in the outlying public areas under state law.

While the media hyped supposed armed attendance by such politically diverse groups as the Oath Keepers and New Black Panther Party, in actuality the individuals attending the events while legally armed were both sparse and peaceful.

This came despite impassioned pleas prior to the Convention by the president of the Cleveland Police Patrolmen’s Association, Steve Loomis, for Ohio Gov. John Kasich to suspend the practice of open carry through an executive order.

Of the final tally of 23 RNC-related arrests made by Cleveland Police during the week of the convention, authorities told Guns.com on Wednesday there were no open carry arrests or issues.

Sgt. Jennifer Ciaccia, a pubic information officer for CPD Chief Calvin D. Williams, advised there were 2,800 assisting officers from outside agencies that helped provide security in addition to approximately 500 Cleveland officers — a third of the department — who were detailed to the event.