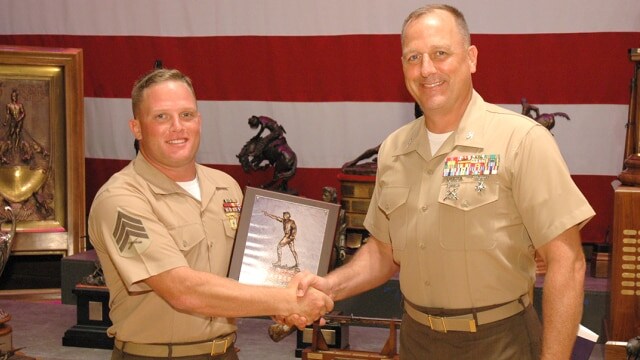 He shot a 500-15x to become the highest individual score at the event, beating the long standing record of 499-28x established at the 1985 Match by SSG Donald Manning.

To put that in perspective, he had to make a perfect “10” on virtually all of his shots to get there.

“My nerves started getting to me. But I just stayed calm – and in those last two shots, I was like, ‘Is this going to make me or break me?’ So I shot one more shot, and the last shot, I was shaking,” DiConza explained to Ashley Brugnone with the CMP. “I told myself, ‘You know, I just shot 19 10’s and a few x’s – just shoot another 10. It’s not that hard. Relax.’”

The NTT Match goes back to 1903 and was commissioned by Congress and President Teddy Roosevelt back when the CMP was part of the Army’s Department of Civilian Marksmanship. Shooters fire at 200, 300 and 600 yards in standing, kneeling and prone positions with a service rifle.

DiConza was a member of the USMC Altendorf team, which came out on top at the National Trophy Infantry Team Match (NTIT), which involves firing a total of 384 rounds at Army “E” silhouettes out to 600 yards, by more than 60 points.

For more on national trophies and matches as well as the competitors and teams that have won them check out the CMP’s website. For this year’s Camp Perry results in particular, click here.