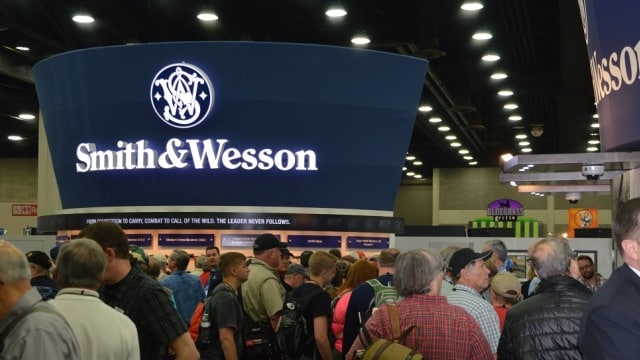 Publicly traded Smith & Wesson has its headquarters in Massachusetts but their popular line of M&P15 rifles are subject to ban in the state. (Photo: Chris Eger/Guns.com)

Last month, Healey informed the state’s 350 licensed gun dealers and the public of her plans to immediately halt the sale of guns whose actions are similar to AR-15s and AK-47s but meet current cosmetic requirements under the state’s assault weapons ban. While shops quickly sold out their inventory and both lawmakers and public safety officials questioned the attorney general’s new interpretation, gun makers were caught in a lurch as previously compliant models were suddenly banned.

On Wednesday, Smith & Wesson, with over 160 years in Massachusetts, donated $500,000 to the National Shooting Sports Foundation’s #GUNVOTE effort for voter registration and education — the largest the campaign has received to date.

“We are honored to support this effort on behalf of our employees and especially the law-abiding firearm owners of Massachusetts, who have so recently been denied their fundamental rights through arbitrary government action that threatens to turn lawful gun owners and dealers into criminals,” said James Debney, Smith & Wesson’s chief executive officer, in a statement.

The gun maker has a line of popular AR-15 style M&P15 rifles and, while they offer versions compliant with state assault weapon bans in California and Maryland, have none that are Massachusetts compliant.

Other big name, big money contributors to the GUNVOTE campaign include ammo maker Hornady, which donated $250,000; O.F. Mossberg, which contributed $150,000; and Sig Sauer, which gave $100,000– though none of those companies have operations in Massachusetts or framed their donations as a response to Healey.

Prior to the S&W donation, NSSF had made it clear they thought Healey’s actions were suspect and all legal options were being considered to fight them.

“NSSF sees this unprecedented action as a blatant anti-gun attack on federally licensed firearm retailers and the law-abiding citizens of the Commonwealth,” the group said in a July 22 statement. “NSSF along with the National Rifle Association and other Second Amendment groups throughout the state are currently weighing all options on the best possible course of action.”

Healey, a Democrat and the nation’s first openly LGBT attorney general, has been often critical of gun rights groups interfering in politics and the firearms industry in general, saying in an op-ed piece for the Boston Globe that “The gun industry has found a way to exploit our laws, a loophole of potentially horrific proportions.”

Meanwhile, an online petition to remove Healey from office has garnered nearly 3,000 signatures and a group advocating much the same has almost 1,700 members.