Firefighters back off as 100K rounds of ammo goes up 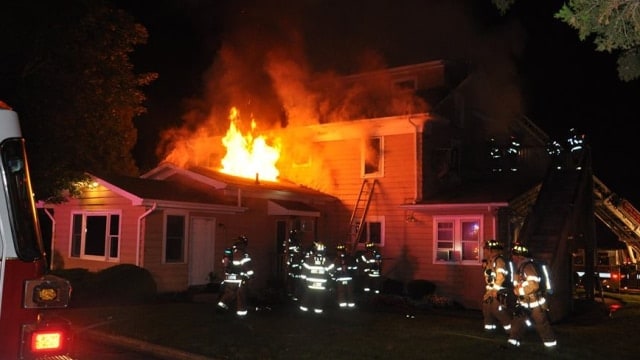 Somewhere in there, 100K rounds of ammunition are screaming in the inferno. (Photo: Toms River Police Department)

A fire in a office building in New Jersey took two hours to bring under control after firefighters cleared away from the blaze when a stockpile of ammunition began popping off.

The fire, which occurred at an office on East Water St. in Toms River, was called in at 3:39 a.m Thursday and township firefighters responded quickly, but had to put the operation on hold when a supply of ammunition inside became unstable, as reported by the Ashbury Park Press.

“As the officers and firefighters approached the building they could hear continues (sic) small explosions from within the structure. This was later determined to be small caliber ammunition detonating from the heat inside of an office space,” noted the Toms River Police Department in a statement.

How much ammo went up?

“The investigators determined that the building’s owner is a competitive shooter and there were approximately 100,000 rounds of ammunition stored within the building,” say police, noting the cause of the fire has not yet been determined and is still under investigation.

Of course, most who are firearm savvy will point to the fact that, sans being loaded in an action to where a barrel will help the bullet achieve velocity, “cook offs” of ammunition are rarely lethal, but that doesn’t mean a good structure fire can’t ruin a pallet of ammo.