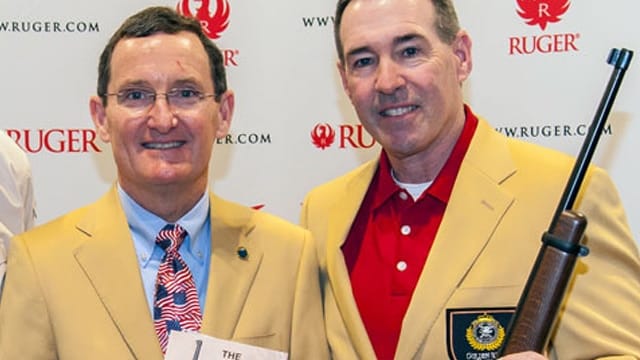 Ruger’s current CEO, Mike Fifer, left, and next one, Christopher Killoy, in April 2015.

Alongside a host of updates this week, Sturm, Ruger & Company announced a successor for chief executive officer when Mike Fifer retires next year.

The Connecticut gun maker named chief operating officer Christopher Killoy to fill the top spot. Killoy joined Ruger in 2003 as executive director of sales and marketing and served as president of the division before his promotion to COO.

A subtle shift in power became apparent during Ruger’s second quarter conference call with investors Wednesday as Fifer, who has been at the helm for more than a decade, handed over the figurative baton.

“I have worked closely with Chris for 10 years, and he is well-qualified to become Ruger’s fourth CEO. He’s been very successful in his 27 years in the firearms industry, and has justifiably earned a great reputation,” Fifer said before tossing to Killoy for an overview of quarterly earnings.

With a simple “thank you,” Killoy jumped right into financial results. However, during the question and answer portion both Fifer and Killoy fielded questions typically reserved for the head honcho.

Fifer responded to inquiries about politics impacting gun sales — annually, Ruger promotes its fundraising efforts for the National Rifle Association — and Killoy discussed operations and product development with the same personable tone as his predecessor.

During his tenure, Fifer has had success steering the company through volatile political times that, as it turned out, largely benefited the industry. Under his leadership, Ruger’s revenue has grown by $600 million. While public gun companies prospered, concerns have been raised about maintaining that success.

Competitor Smith & Wesson opted to invest in other products in addition to firearms, like shooting accessories, knives, optics and other outdoor goods, with much success. The Massachusetts company closed out 2016’s fiscal year with a 31 percent increase in sales. The $722.9 million included $65.3 million from its new accessories division.

Analysts say outdoor goods open Smith & Wesson up to broader and more lucrative markets. Yet, Fifer has expressed in previous calls with investors little interest in expanding to other markets. Ruger, which price per share is valued at nearly double Smith & Wesson’s, has only expanded production for goods directly related to firearms like ammunition and silencers.

In recent times, ammo has nearly sold itself, but silencers require navigating a slew of regulatory hurdles for both the maker and consumer, as Killoy noted in the call.

“One of the unique things about Class III items is the licensing requirements that go along with that, because we sell that product through two-step distribution, we’ve got a long delay as it goes to distributors, then to retailers, and then ultimately to consumers,” he said.

Killoy said it has been difficult gauging the demand for silencers because Ruger shipped the first batch out last week. However, in the past decade silencer sales have spiked due largely to the marketing efforts of smaller companies.

In this week’s quarterly filing, Ruger reported $166.3 million in firearm sales contributing to total quarterly earnings of $167.9 million. However, the company does not break down sales of other goods.

Before joining Ruger, Killoy held various sales, marketing and management positions with General Electric, Smith & Wesson and Savage Arms. He served in the U.S. Army and graduated from the U.S. Military Academy at West Point in 1981. He will take over as CEO in May.