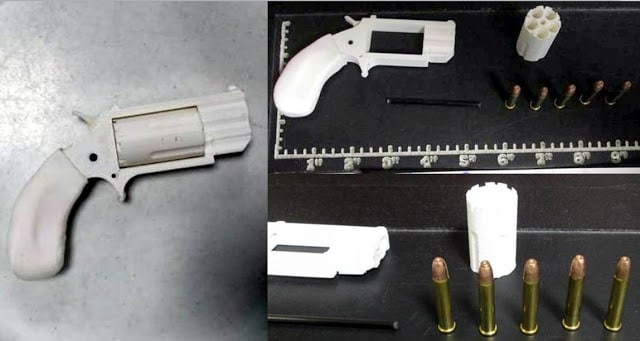 The 3D printed revolver discovered on a carry on bag at the Reno airport. (Photo: TSA)

Security officers at the Reno-Tahoe International Airport found a 3D printed gun in a carry on bag this week.

According to the Transportation Security Administration, officers at the Reno airport discovered a .22-caliber pistol at the security gate on Aug. 4. The image of the gun assembled from 3D printed parts was of a small revolver.

It’s unclear why the gun was packed in the carry-on bag, but the update was part of TSA’s weekly blog post to remind travelers the do’s and don’ts about packing firearms. Local authorities have not issued a statement regarding the incident either.

What’s also unclear is where designs for the Reno revolver came from or if it’s even functional. An initial search of downloadable 3D printed firearm designs reveal only a handful of revolver designs, none of which contain the aesthetics of the handgun recovered in Reno.

Originally introduced in 2013, the bill was a direct response to advancements in designs for 3D printed firearms. Then it was reintroduced last year in both the House and Senate after the Department of Homeland Security published a report showing TSA officers failing to stop prohibited items from passing through security 95 percent of the time.

In a similar incident, two British reporters tested security across the pond in 2013 when they built a 3D printed gun using blueprints downloaded from the Internet and snuck it onto a Eurostar train. They were unchallenged by airport-style security during weekend rush-hour traveling from London to Paris.