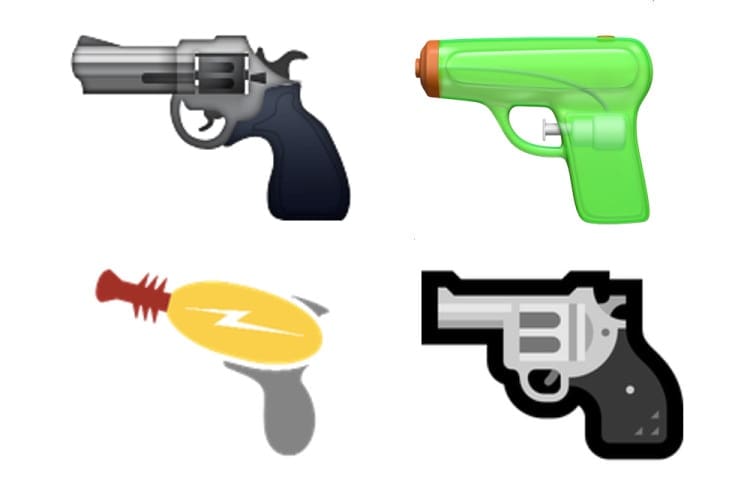 Apple, top, replaced their handgun emoji with a water pistol. In contrast Microsoft, bottom, added a revolver in lieu of the previous blaster gun. (Photo: The Telegraph)

Apple was the first to make the switch on Aug. 1 replacing their previous handgun emoji with a bright, green water gun for iOS 10 users. A day later, Microsoft launched the Windows 10 Anniversary Update which saw the old pistol symbol — a space-themed, green blaster — replaced by a shiny, silver and black revolver.

Neither company has outright commented on the switch-up; however Microsoft Creative Director Ramiro Torres said in a blogpost on Microsoft’s website that the company strives for authenticity when designing new symbols.

“We want to make sure when we communicate, and design a symbol or emoji, that it actually means what it’s meant to mean,”  Torres said. 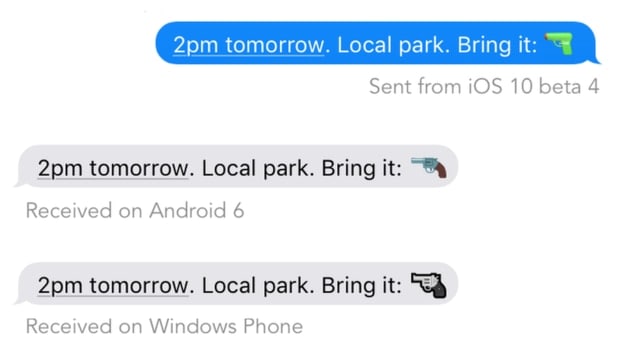 Emojipedia Editor Jeremy Burge posted an example of how Apple’s switch could cause confusion for Android and Windows users. (Photo: Emojipedia)

“The real issue here is that emoji is bigger than Apple. Or to put it more succinctly, this is dangerous,” Jeremy Burge, editor of Emojipedia, wrote in a blogpost. ”If Apple goes ahead with this change in the public iOS 10 release, one person could innocently tweet a toy and have that be seen by others as a weapon.”

This isn’t Apple’s first foray into the firearm emoji debate.

In June 2016, the company pressured the Unicode Consortium, which oversees standardization of emojis, to remove a rifle symbol from consideration in Unicode 9.0.  The rifle was originally tagged as part of several Olympics-themed symbols for the updated emoji library.

No explanation was given as to why the rifle emoji was removed from consideration. According to Buzzfeed, Microsoft also voted against the rifle.

Apple and Microsoft, along with Google, are voting members on the Consortium.