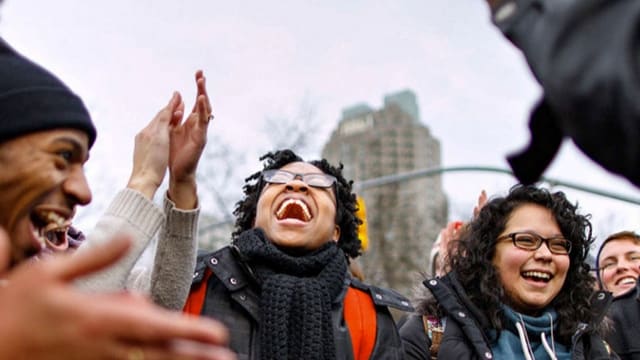 Millennials laughing, joking and having a good time. (Photo: GenForward)

A majority of young, minority voters support gun control policies, according to a monthly survey of Americans between ages 18 to 30.

The Black Youth Project at the University of Chicago with the Associated Press-NORC Center for Public Affairs Research interviewed 1,940 respondents and parsed out answers by race. They conducted interviews online and over the phone from July 7-9.

Support for background checks — the overwhelming majority — is on par with other major surveys. However, another recent AP survey, asking a more specific question, shows 73 percent of Americans saying they favor federal background checks for gun buyers at gun shows and other private sales.

Out of all the groups polled, more Asians expressed concerns about the dangers of gun ownership. Sixty-two percent say owning a gun puts people’s safety at risk alongside 46 percent of blacks, 39 percent of Latinos and 34 percent of whites.

Most young people seem to be hesitant to describe recent mass shootings as acts of terror except in one case for whites.

Responding to June’s nightclub shooting in Orlando, 32 percent of blacks, 44 percent of Asians, 40 percent of Latinos and 58 of whites called it terrorism.