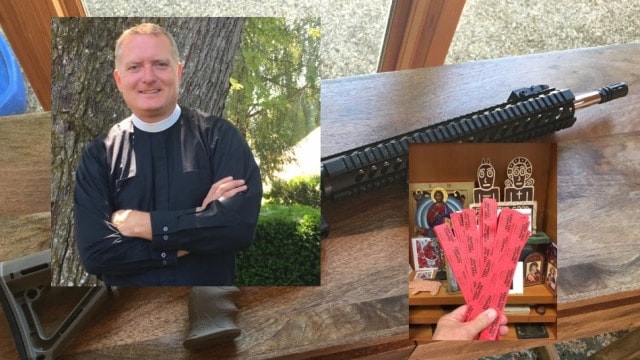 Rev. Jeremy Lucas of Christ Church Episcopal Parish in Lake Oswego, Oregon has come under fire in recent weeks over an AR-15 he won in a raffle, and then gave to a parishioner to hold while he arranged its destruction. (Photo: Composite)

At least one state lawmaker wants an Oregon clergy member prosecuted after he spent $3,000 of his church’s discretionary fund on raffle tickets for a gun he may have transferred illegally.

As previously reported by Guns.com, Rev. Jeremy Lucas of Christ Church Episcopal Parish in Lake Oswego went all-in on the raffle in July by throwing $3,000 in the plate for a girls’ softball team, coming away with the lucky ticket to a new AR-15.

Instead of putting the gun in his collection, Lucas told local media he intended to destroy the firearm as a political statement, saying,  “There are millions of guns, I know that. But this gun will never be used to kill kids in schools, kill people in a movie theater, kill people at an office party or at any other place of mass shootings.”

However, he soon ran into trouble with the state’s new and confusing expanded background check law by asking a parishioner to store the gun while he arranged its transformation into an art object without first going through a mandated check.

Under the new law, all private gun transfers must take place through licensed firearms dealers who would perform background checks. There are some narrow exceptions for family transfers, brief loans at shooting ranges, law enforcement, and – in some cases – inherited firearms, but disregarding these, all others must go through a dealer.

With the state police looking into the case against the former attorney turned rector, state Rep. Bill Post, a Republican who spoke in opposition to and voted against the background check measure in its legislative journey, feels Lucas should be made prosecuted to show the law’s core failings.

“I am asking the Clackamas County DA to prosecute this pastor under the law created by SB941,” wrote Post in a conservative blog. “The Oregon State Police force is currently investigating the situation but ultimately it will be up to the Clackamas DA. I realize that this is an absolute waste of the taxpayer’s money and I think it’s ‘frivolous’ but it must happen to set an example. Again, the pastor could easily say ‘I didn’t know’ and hand the rifle over or have the additional background check done.”

Similarly, Lake Oswego Police Chief Don Johnson is taking some heat from state gun rights advocates for his handling of the issue.

“He, the state police, and many legislators were informed of the violation last Thursday (July 30),” Kevin Starrett, director of the Oregon Firearms Federation told Guns.com in an email. “Oddly, although the Chief was a vocal advocate of SB 941, and the crime was committed in his jurisdiction, he chose to do nothing but hand it off to the State Police.”

In the lead up to SB 941’s tight partisan vote in the state legislature, Johnson lent his name to the Bloomberg-funded campaign to help pass the measure. Further, he testified for the bill in tense senate hearings.

This, to Starrett, points to the chief no longer having the courage of his convictions.

“The law is idiotic,” said Starrett. “We told them over and over that this was going to be the result. Sheriffs came from all over the state to testify against it for this very reason. Now it is clear the liberals in charge are falling all over themselves trying to figure out what to do next.”

As for the church funds used in the raffle – normally earmarked for helping needy parishioners pay their rent or utility bills — Lucas argued in his blog that contributing to the raffle to support the baseball team while taking the AR-15 out of circulation was a good use of church dollars.

“No one from Christ Church has asked for their money back,” wrote Lucas. “In fact more money has been donated from both members and non-members than was actually spent on buying raffle tickets. That money will be used to support work that reduces violence in our world and builds community.”

While comments to the church’s Facebook page have been largely supportive of Lucas’s efforts,  he has received harsh criticism on his personal page.

In a sign of support, Rev. Michael J. Hanley, the Bishop of the Episcopal Church of Western Oregon, last Thursday said that he stood, “squarely behind Rev. Lucas and commend him for his actions. May we all be able to beat our swords into plowshares one day.”