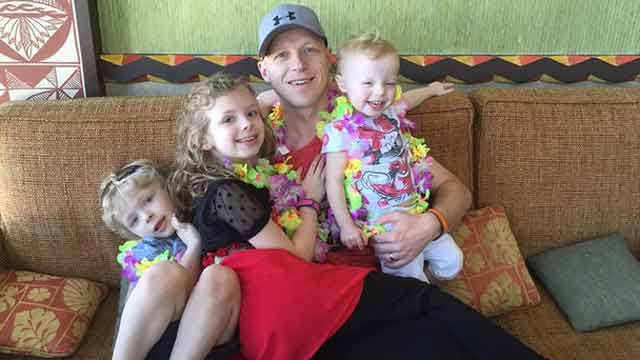 A Pennsylvania couple, along with their three young children, were found dead in their Sinking Spring home Saturday afternoon in what appears to have been a murder-suicide.

A concerned family member requested a welfare check after Megan Short, 33, failed to show up for a previously planned lunch date. The family member called the police after attempts to contact Megan by both cell phone and the home’s land line were unsuccessful, the Berks County District Attorney said in a statement.

Before responding to the call, officers learned there was what was described only as a history of “domestic issues” between Megan and her husband, Mark, 40.

Officers arrived at the home around 2 p.m. and tried to make contact with the family, but knocks at the door went unanswered. Fearing for the well-being of the family, responding officers forced entry into the home. Once inside, they discovered the bodies of Megan and Mark, along with their three children, 8-year-old Lianna, 5-year-old Mark Jr. and 2-year-old Willow. The family dog was also found dead.

The district attorney noted the bodies were found in the living room and all of the family members – including the dog – had been shot to death. A handgun was lying beside one of the parents, and authorities also discovered what appeared to be a handwritten note, which indicated the incident was a murder-suicide. At this time, authorities have not confirmed who wrote the note or by whose body the gun was found.

Likewise, authorities have not elaborated on the previous domestic issues between the couple. However, an NBC report noted that the couple’s youngest child was born with a severe congenital heart condition which led her to have a heart transplant as a newborn.

In a post on a website dedicated to support for families of heart patients, Megan detailed the struggles of having a child with special needs, noting that she suffered from Post Traumatic Stress Syndrome and sought treatment through therapy and medication.

Detectives spent more than eight hours combing through the scene after the family’s bodies were discovered. Along with the Sinking Spring Borough and the District Attorney’s Office, the Spring Township Police Department is assisting in the investigation, which is ongoing.

The district attorney called the killings a “tragic domestic incident.”