The BBC has obtained images of British special forces units operating in Syria and their war machines are a throwback to their old desert WWII roots.

Today Britain has some 300 personnel deployed to Iraq and Syria on surveillance and advisory missions, calling in NATO and allied airstrikes on ISIS positions as needed. The video above purports to show images of these men in the Al-Tanf area near the Iraqi/Syrian border. Their sweet rides are Al-Thalab long-range patrol vehicles (LRPV) which are hopped up versions of the 79 Series Toyota LandCruiser that have been popular not only with Jordan who is a close ally and heavy-hitter in the Middle East but also with Belgium and Mauritania.

While the vid is short, there is a few seconds of “get some” from a Syrian technical with a big (23mm?) ComBloc AAA mount on the tailgate.

Outfitted with a variety of general purpose and heavy machine guns and with AT rockets on the hood and elsewhere, these unidentified Brit pipehitters look every bit the descendants of their World War II predecessors in the Special Air Service Brigade, Long Range Desert Group and Popski’s Private Army, though with some updated firepower.

Operating often behind the fluid enemy lines in North Africa and later Italy, those irregular British commandos looked more like land pirates in a Mad Max film than soldiers– but they were the last thing that many enemy troops ever saw. 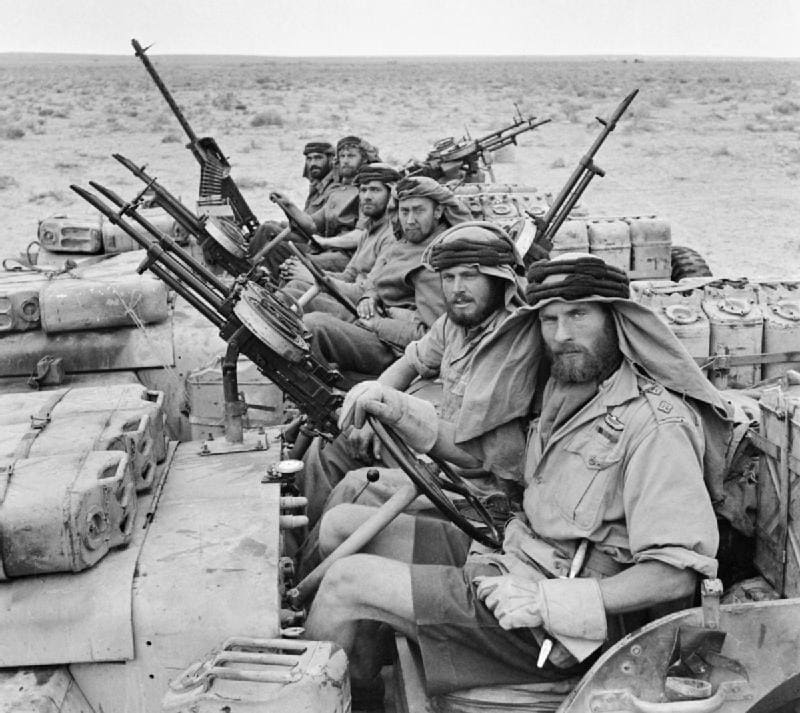 Those twin Vickers K guns, though! A close-up of a heavily armed patrol of ‘L’ Detachment SAS in their Jeeps, just back from a three month patrol in North Africa 1942. The crews of the jeeps are all wearing ‘Arab-style’ headdress, as copied from the Long Range Desert Group. (Photo: Imperial War Museum)