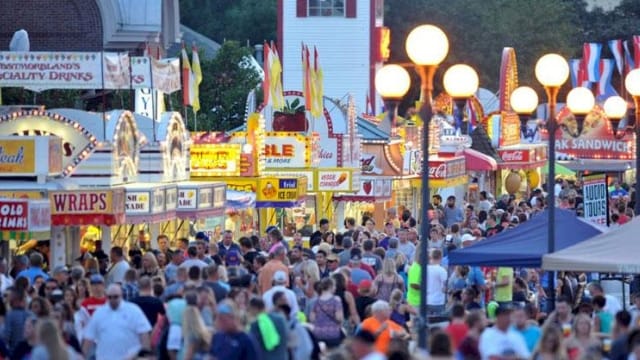 With over a million attendees, Iowa’s governor holds that legal concealed carry is not needed at the Iowa State Fair due to the state police presence. (Photo: Iowa State Fair)

The upcoming Iowa State Fair will have a cow made out of butter, Steven Tyler and Meghan Trainor, but not legal concealed carry — and the state’s Republican governor is OK with that.

Set to run Aug. 11-21, the annual event at the Iowa State Fairgrounds in Des Moines dates back to 1854 and last year saw more than a million people attend. Guns are prohibited at the event with or without a valid Iowa permit to carry despite Iowa’s otherwise strong preemption statutes. The Fair Board has the power to change this under state law, but has repeatedly declined to do so, leading some to take their case to state lawmakers.

While gun rights groups to include the Iowa Firearms Coalition, an NRA state-affiliated organization, testified in front of the Iowa Legislature’s Administrative Rules Review Committee last Friday on behalf of allowing concealed carry at the Fair, the answer, for this year at least, is no.

While Gov. Terry Branstad has often held up his support of pro-gun issues, he agreed with the Fair Board’s current rule, saying concealed carry by the public isn’t needed at the event.

“I support the right to carry, but I think the fairgrounds is a little different situation because we have such phenomenal coverage from the highway patrol at the fair,” Branstad said, as noted by the Quad City Times. “So, it’s not like other places where you have nobody with a firearm to protect somebody against a violent act. We have excellent security, and I think the patrol does a great job. And because of that, I think that’s the reason why you really don’t need to have your own firearm for your protection at the fair.”

Second Amendment advocates argue the Fair is sometimes dangerous and Iowans should be able to defend themselves as allowed virtually everywhere else in the state.

In 2010, a group of 30 to 40 teens roamed the fairgrounds conducting random assaults during an event termed by some as “beat whitey night” that resulted in both arrests and injuries among police. Going further back, during the 1996 State Fair, two funnel cake vendors were found bound, gagged and shot to death in their trailer on the fair’s campgrounds.

“The current rule means that those who park their vehicles on the Fairgrounds must be disarmed from the time they leave their homes until they return,” noted IFC Board Member Richard Rogers in his testimony. “Can the Fair Board demonstrate tangible benefits that justify the risk of disarming citizens who can and do legally go armed everywhere else without incident?”

Nevertheless, the group isn’t going to drop their campaign to bring lawful concealed carry to the Fair.

Until then, about the most deadly weapon fair attendees can legally carry next week may be a Jalapeno Double Bacon Corndog.