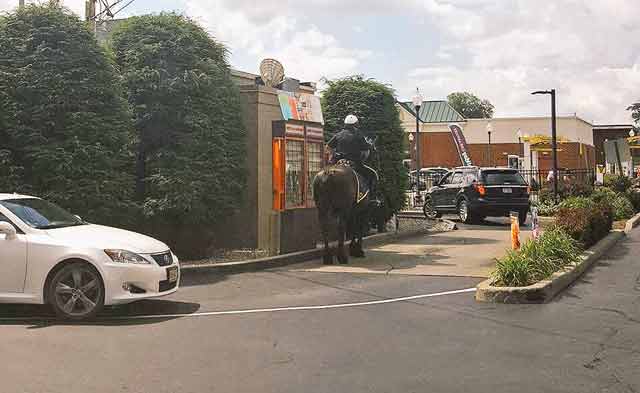 Residents in Saratoga Springs, New York, got quite a laugh recently when a local mounted police officer was caught going through the drive-thru of a local Dunkin’ Donuts on horseback.

Kasandra Carda, a real estate broker from Saratoga Springs, snapped a photo of the unusual sight, which has since been shared all over social media, along with the hashtag #horsesrunondunkin.

“We live in such a crazy time when a simple funny photo I took and posted on FB goes viral,” Carda said in a Facebook post.

The Saratoga Springs Police Department followed up with a post of their own, noting that Officer John Sesselman and his four-legged partner, King Tut, were patrolling downtown when Sesselman grabbed a cup of joe for himself and a glazed munchkin for King Tut.