The statistics are part of the agency’s 2016 Annual Statistical Update of Firearm Commerce in the United States. 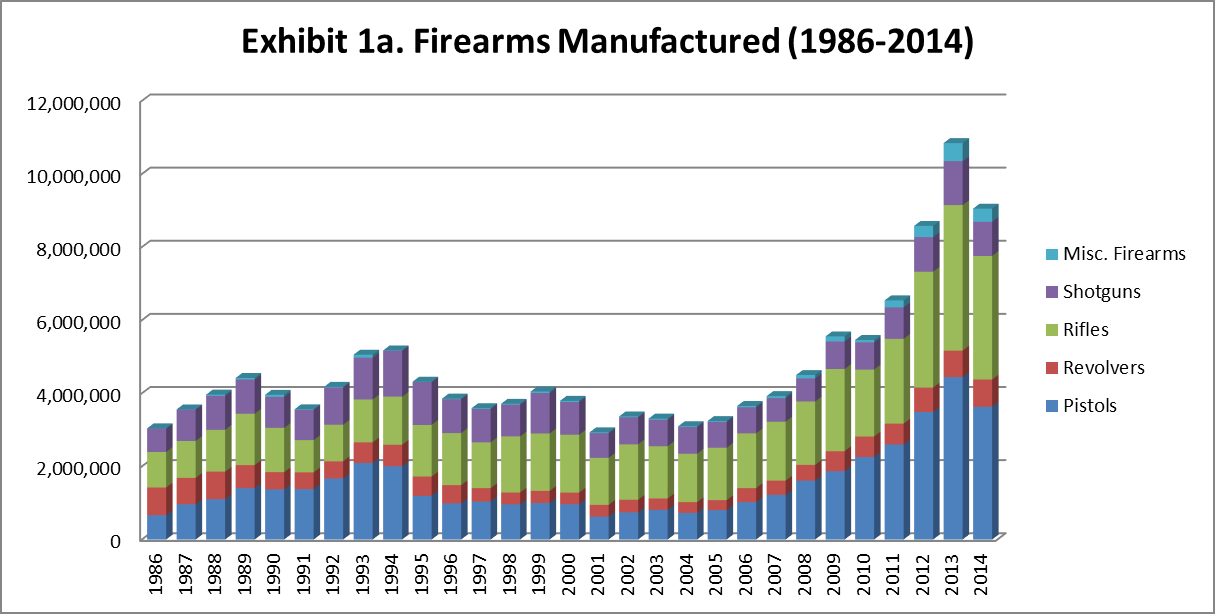 The report includes data drawn from ATF’s Annual Firearms Manufacturing and Exportation Report (AFMER), which runs a year behind due to protections accorded under the Trade Secrets Act. With that, the latest data is from 2014 and shows 9,050,626 modern firearms produced, excluding any made for the U.S. military. This included 3,633,454 pistols and 3,379,549 rifles with the balance made up of revolvers, shotguns, and miscellaneous firearms. As such, 2014 was the highest year on record since 1986 with the exception of 2013, which topped 10.8 million firearms.

American firearms makers are seeing continued success overseas, with 2015 noting a jump of about 7 percent from 2014 in export figures, climbing to 420,932 guns sent outside of the country. Of this figure, almost half were rifles. When taken as a whole, it is the largest export success seen by the domestic firearms industry since 1995 when 424,221 guns were shipped overseas.

American gun enthusiasts still have a very healthy appetite for foreign-made firearms, with 3,930,329 guns imported in 2015, effectively nine guns for each one exported by U.S. makers. Some 923,951 of these guns, or almost one in four, were Austrian made pistols. As that country is home to polymer pistol powerhouses Glock and Steyr, this figure should come as no surprise. Another 485,639 pistols came from Brazil, home to Taurus and Rossi.

The 2015 figure dwarfed that of the previous year by more than 10 percent but still fell short of breaking the record high set in 2013 of over 5.5 million firearms imported.

However, import applications filed with ATF for future guns coming in are at an all-time low, with just 7,293 delivered to the agency, the smallest figure since 1986. By comparison, in 1991, before the ban on many types of firearms from overseas, the ATF received 21,483 import applications.

This may be a result of increased import regulations and trade sanctions such as the one placed on Russia by the Obama administration in 2014 which saw subsequent imports from that country total a paltry 9,556 firearms of all kinds last year.

The report, containing the number of Federal Firearms Licensees over the past 40 years, shows that the number peaked at 284,117 in 1992. In 1993, this figure began to decline as the Clinton-era ATF cracked down on “kitchen counter FFLs” by raising fees from $30 for a Type 1 license to $200 at the same time the Brady Bill requiring mandatory background checks on over the counter transfers became law. This downward spiral continued until 2001 when it bottomed out at just 102,913 active FFLs of all types, but has been gradually climbing ever since.

Texas had the highest number of licensees, with 10,910, while the District of Columbia was the lowest with 28.

ATF figures show that compliance inspections of FFLs in 2015 are at the lowest numbers in the past decade with 8,696 inspections performed, or a rate of about 6.3 percent of FFLs. This is down from 2014’s 10,437 inspections and are the lowest numbers recorded since 2006. It should be noted that FFLs that operated as business entities were nearly twice as likely to be inspected as other types.

“The data reinforces what we have been saying for several years,” Mike Bazinet, director for public affairs for the National Shooting Sports Foundation, the trade group for the firearms industry, told Guns.com Tuesday.

“This is the story all these numbers support: More and more Americans are seeking to exercise their right to keep and bear arms to defend themselves and their families and to enjoy the shooting sports. Retailers and ranges report they are busier than ever,” said Bazinet.

He contends the figures are a powerful counterpoint to arguments for increased gun restrictions.

“And even while gun ownership has increased, crime has fallen dramatically and accidents involving firearms are at the lowest level since record keeping began early in the last century,” said Bazinet. “These are inconvenient facts for the anti-gun activists who seek to diminish the extent of gun ownership and belittle the role guns play in self-defense and for sporting purposes.”