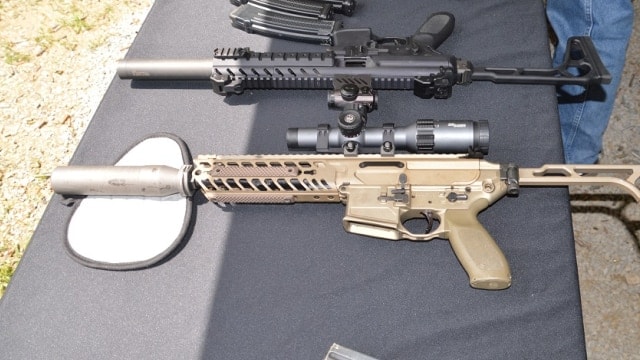 Statistical data from the ATF shows more than 4.4 million NFA items are currently registered, including over 900,000 suppressors. (Photo: Chris Eger/Guns.com)

Data released by the Bureau of Alcohol, Tobacco, Firearms and Explosives this week show a big jump in National Firearms Act items to include a 14 percent rise in the number of suppressors and a nearly 18 percent bump in short barreled rifles registered.

The information comes from the new Firearms Commerce Report, which also contains information about domestic firearms manufacturing, as well as the importation and exportation of firearms.

Sweeping in its context, the report gives the public a rare glimpse into the National Firearms Registration and Transfer Record, which is the federal list of all items, such as suppressors, SBRs, short-barreled shotguns, destructive devices and any other weapons logged under the NFA as of February 2016.

Comparing last year’s report with the new information shows the aggregate number of NFA items of all kinds have climbed to 4,436,096, adding over a quarter million devices to the registry in a twelve-month period from February 2015.

In all, some 1,545,847 NFA forms of all kinds were processed in 2015, a new record, with about a third of these being for manufacturing of new devices.

Suppressors and silencers remain a hot ticket item and the registry now stands within striking distance of a million devices. In a sign of increased acceptance, more traditional firearms makers are producing factory standard offerings with threaded barrels while taking steps to expand and produce their own in-house suppressor lines.

The five states with the highest number of registered mufflers are Texas (165,499), Florida (61,015). Georgia (49,357) Oklahoma (32,192) and Virginia (31,205) which combined account for over a third of the overall total. Notably, Florida, which saw the recent legalization of game hunting by suppressor-equipped sportsmen, had at least 10,593 new silencers registered last year.

Most importantly, three states in recent months — Vermont, Iowa and Minnesota — have legalized suppressor ownership for civilians, bringing the total to 42.

Although the rate of suppressor growth slowed when compared to last year’s 39 percent jump, those inside the industry are still impressed with the latest numbers.

“Every year, the suppressor market is growing by leaps and bounds, but we’re still not even scratching the surface,” Knox Williams, president of the American Suppressor Association, told Guns.com. “Every day, misconceptions are being broken, and new consumers are becoming wise to the merits of suppressors. Couple that with pro-suppressor legislation being enacted in states across the country, and it becomes easy to understand why so many sportsmen and women are choosing to use suppressors to help protect their hearing.”