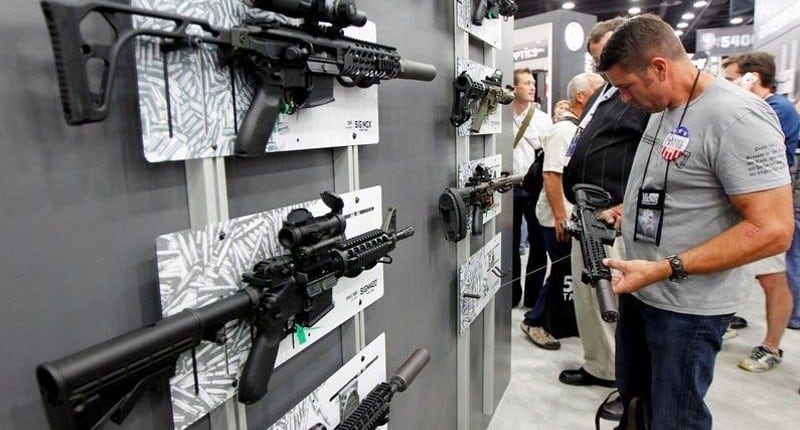 Sig’s MCX rifle and a host of other models are named in a suit filed by Paul Leitner-Wise. (Photo: Reuters/John Sommers II)

Inventor Paul Leitner-Wise says his former employer LWRC, alongside major gun maker Sig Sauer, conspired to steal his invention and hide the evidence, he claimed in a lawsuit filed in federal court in Maryland.

The June complaint hinges on a self-regulating, short stroke AR-15 piston Leitner-Wise had patented in 2006. He says he developed the design while working for the then named Leitner-Wise Rifle Company.

After selling the company in 2005, Leitner-Wise and new owners of LWRC struck an employee agreement. In those documents, LWRC agreed to recognize the intellectual property of Leitner-Wise and pay him .05 percent royalties on the design so long as the company was named assignee of the patent, the lawsuit says.

Leitner-Wise initially planned to stay on with the new LWRC but a contentious relationship between him and the new owners forced a departure. However, after leaving the company in 2006, employee documents promising royalties and recognition turned up missing, the lawsuit says.

It’s the inventor’s position that this was no mistake or coincidence. During that time, Leitner-Wise thinks the documents were destroyed to prevent him from using it as evidence to pursue monetary compensation, which LWRC was unable to provide in 2006.

“At the time I left the company they were not in a financial position for compensation,” Leitner-Wise told Guns.com in a phone interview. “It’s my belief that it was their intent to disguise any liability with regard to the intellectual property that would, in fact, make them less attractive to a potential investor or buyer.”

“Essentially they didn’t want to abide,” he added.

Without any hard-proof, Leitner-Wise moved on and eventually created a new company, aptly named Leitner-Wise Manufacturing, where he continues to manufacture AR components.

LWRC went on to change their name from Leitner-Wise Rifle Company to Land Warfare Resource Company in 2008.

Leitner-Wise’s attorney reignited the fire when he recently discovered the employee agreement while working on the inventor’s immigration case. The papers were handed over to a civil attorney where Leitner-Wise began building a lawsuit against his former employer.

As if this case couldn’t get any more convoluted, Sig was brought into the mix due to an earlier lawsuit between the New Hampshire-based manufacturer and LWRC International.

LWRC International slapped Sig with its own patent infringement suit in 2011. The rifle company alleged that Sig had infringed on that same short stroke piston.

In order to mount a defense in that case, Sig looked into the patent assignment. Sig discovered LWRC International had fraudulently assigned the patent in a foreign patent office, the lawsuit says.

“LWRC excluded me from the assignment. They stated on those assignments that the company was the inventor,” Leitner-Wise told Guns.com. “They were keen to disguise any involvement of me.”

Sig and LWRC eventually reached an unspecified agreement and the case was ultimately sealed, but Leitner-Wise says this proves his conspiracy theory.

“It’s clear they actually did conspire together,” he added. “There’s no other legitimate reason for sealing the case other than Sig uncovered something that was damaging to LWRC.”

Leitner-Wise’s complaint names both companies as conspirators and specifically calls out the design of several popular rifles by both including the M6, IC and SIX lines, REPR and SABR from LWRC International and Sig’s MCX, SIG516, SIG716 and P516 .

Guns.com reached out to LWRC and Sig Sauer for comment but received none by the time of publication.

As of now, no monetary compensation has been outlined, though, Leitner-Wise told Guns.com he’s owed “substantial sums.”  Leitner-Wise said the suit is not just about the royalties or damages, but rather it serves as a cautionary tale for gun manufacturers.

“I’d like this to be a warning to companies who think they can just steal people’s property and there be no repercussions for it,” he said.

Neither Sig nor LWRC have responded to the filing and no trial date has been set.