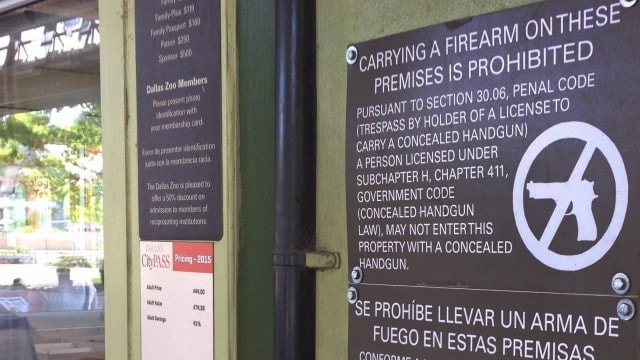 Under a new proposal, businesses in the Lone Star State that establish gun free zones would do so at their own risk. (Photo: Louis DeLuca/Dallas Morning News)

A Tea Party Republican intends to introduce a bill that would place civil liability on businesses that ban lawful guns in the event of a patron getting hurt.

The measure, to be introduced in the coming session, would encourage publicly accessible businesses to drop current gun free zones out of fear of potential lawsuits arising after an incident, in effect, declaring one at their own risk and assuming custodial responsibility for their patrons.

“Currently, while these gun-free zone businesses possess the right to prevent legally licensed to carry permit holders from carrying a firearm while on their premise, there is no designation of responsibility to provide for the safety of their patrons during an active shooter situation,” said sponsor of the legislation, state Sen. Bob Hall, R-Edgewood, as noted by the Dallas Morning News.

The bill, says Hall, is based on one proposed in Tennessee earlier this year that allowed anyone with a valid gun permit to sue a property owner in the event of death or injury from either man-made or natural hazards while inside a gun-free zone. Those seeking to litigate would have a two-year window from the event and need to show they were a permit holder at the time but were not armed due to a “no guns” sign posted in the business. Gov. Bill Haslam (R) signed a watered down version of the measure on April 27.

As reported by the CBS11, Hall’s bill will likely include gun free zones at movie theaters, malls, hotels, schools and bars.

While Hall’s proposal is still in its infancy, the editorial board of the Dallas Morning News came out against the bill Wednesday.

“Hall’s proposal effectively would use the threat of liability to coerce businesses into allowing guns,” read the op-ed in part. “Shouldn’t the rights of businesses to restrict weapons matter too?  Why should a business also be blamed when someone else actually injured customers and created mayhem?  A constitutional conservative and believer in limited government and personal responsibility ought to be protecting the right of a business owner to make the judgment that a gun-free zone is an appropriate way to keep patrons safe.”

Hall expects to introduce the bill in January though it could be prefiled earlier.