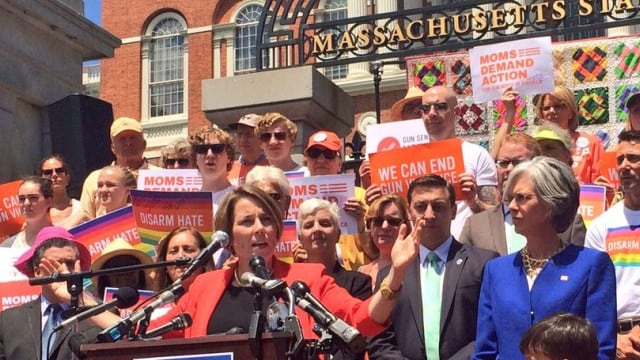 Attorney Gen. Maura Healey has the growing support of gun control groups, mayors, and lawmakers for her push to change how the state’s gun laws are interpreted. (Photo: Maura Healey via Twitter)

Last month, Healey announced her office was arbitrarily reinterpreting the Commonwealth’s 1998 ban to include gun actions rather than cosmetic features, resulting in an immediate ban on many semi-auto firearms. While some in the state have voiced opinion that her move may be an overstep of her authority, and the trade group for the firearms industry advised last week they will see the AG in court, Healey is picking up quick allies.

On Thursday, a group of 19 sitting mayors led by Newtown’s Setti Warren issued a statement expressing their strong support for Healey.

“We have called again and again for national solutions to gun violence, to increase mental health funding, and to end the sale of military-style weapons to civilians, because our cities are not war zones,” reads the letter.

Among the signatories were Boston Mayor Martin Walsh, Worcester’s Joseph Petty, Lowell’s Edward Kennedy, Jonathan Mitchell of New Bedford, Brockton’s Bill Carpenter, and E. Denise Simmons of Cambridge — more than half of the Commonwealth’s 10 largest cities in terms of population. Of the 19 city leaders, all but four are members of former New York Mayor Michael Bloomberg’s Mayors Against Illegal Guns organization and all are declared Democrats.

Walsh, in particular, has been outspoken on gun control measures despite the fact that firearm violence figures in Boston, with 33 gun homicides in 2015, are at a historical low. He traveled to Washington D.C. to stand with President Obama in January to support a number of executive actions on gun violence after sending letters to Boston’s registered gun owners offering to buy back their firearms while warning of their legal responsibilities.

In addition to Thursday’s letter from the mayors, Healey gained the public support this week of the state’s Congressional delegation to Washington including both U.S. Sens. Ed Markey and Elizabeth Warren as well as all nine House members. The group — all Democrats — penned a letter to the Boston Globe published Wednesday in which they held, “Massachusetts has already seen a decline in assault weapon sales and significant compliance by manufacturers and gun dealers since the announcement.”

Finally, on Tuesday, the Massachusetts Medical Society applauded Healey “for her notification to the Commonwealth’s gun manufacturers and sellers of an increase in enforcement of the assault weapons ban to now include sales of copycat weapons.”

Thank you Mayor @settiwarren and thank you to each mayor who's signed on for your courage and support. pic.twitter.com/A7nxiL89qZ