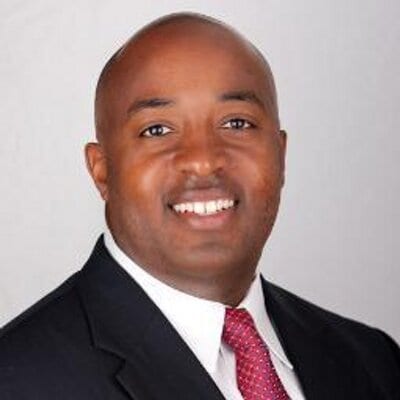 Earl Phillip had recently been appointed as chair of Donald Trump’s National Diversity Coalition, but stepped down Thursday. (Photo: Twitter)

At the heart of the accusation is a lawsuit filed in North Carolina earlier this week by former staffer Vincent Bordini who says Phillip assaulted him while riding in a Jeep after a campaign stop.

“Phillip held the gun in his right hand, the one closest to Vincent. Phillip’s index finger was on the trigger,” the lawsuit says. “Phillip pushed the barrel (of the gun) into Vincent’s knee. The barrel’s pressure crinkled Vincent’s blue jeans. Phillip ominously stared sidewise at Vincent while driving the Jeep down the road and the barrel into Vincent.”

Bordini says that he asked Phillip, “What the fuck are you doing?” This prompted the manager to re-holster the gun and nothing else was mentioned.

Later that evening, Bordini reported his experience to the regional director of western North Carolina, who confided in him that this wasn’t the first time Phillip had pointed a loaded .45-caliber pistol at staffers.

During a short investigation, Bordini, who was hired as a software trainer for the Republican campaign, uncovered two additional staffers and two other individuals not associated with the campaign who all shared similar encounters with Phillip.

At this time, Bordini took the matter to higher-ups within the campaign, but was largely ignored by his superiors. The campaign’s National Field Director Stuart Jolly and Trump’s then-campaign manager Corey Lewandowski both knew of the matter but ultimately did nothing to rectify Phillip’s behavior, the lawsuit says.

Bordini continued to work for the campaign for another month before the suit claims the trauma was too much and he was forced to resign in mid-March.

“Vincent became disgusted with the Trump Campaign’s lack of corrective action. He could no longer tolerate working in an environment where his superior could pull a gun on him at any moment,” the lawsuit says. “Simply put, Vincent experienced significant emotional distress after the incident.”

Bordini describes himself as a loyal Trump supporter who enthusiastically backed the provocative Republican nominee. Choosing to file a lawsuit in lieu of a police report, the former staffer hopes to minimize the impact on Trump’s campaign.

“This was a difficult decision. Vincent was a long-time GOP operative. What’s more he truly respected Mr. Trump and had every intention of dedicating himself to getting him elected in November,” the lawsuit says. “But enough is enough.”

The lawsuit lists assault, battery and negligent retention and supervision among other claims.

Phillip had recently accepted a position as the deputy chair of Trump’s National Diversity Coalition, but officially stepped down from that assignment Thursday. “I have retained legal counsel. I have also stepped down from all affiliation with any and all organizations associated with Donald J. Trump for President to include the campaign and National Diversity Coalition for Trump,” he told Charlotte news station WCCB.

Though the Trump campaign is also named in the filing, the organization has yet to issue a comment on the lawsuit.

This isn’t the first time Trump’s campaign has come under fire for questionable tactics and aggressive behavior. Former campaign manager Lewandowski was entrenched in controversy earlier this year after being charged with misdemeanor battery —later dropped— and after grabbing a reporter as she approached Trump back in March. Lewandowski was fired by Trump and his two sons in June.