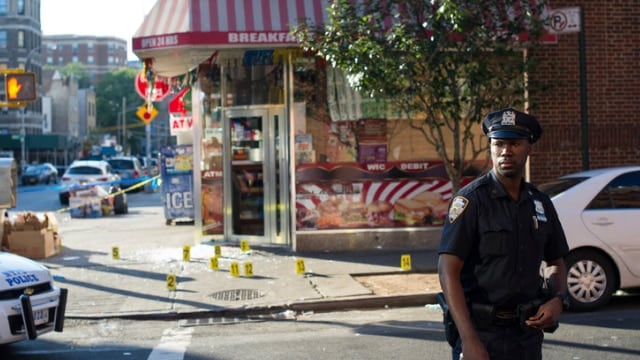 A shooting this week at a Bronx deli with a handgun snatched from an NYPD officer has exposed potential shortcomings in the agency’s equipment. (Photo: Gregg Vigliotti/The New York Times)

The New York Police Department’s duty gear choices are coming under fire after a bodega worker was killed in the Bronx this week with a gun grabbed from an officer’s holster.

In the predawn hours of Aug. 9 officers were flagged down regarding a dispute at the A&M Deli at 230 East 198th Street. During the ensuing incident, as detailed by NYPD Assistant Chief Larry Nikunen, Efraim Guzman, 30, was able to remove an officer’s gun from the holster and shoot a bodega worker he had previously been in a dispute with across the street. Shot by officers twice, Guzman was taken to St. Barnabas Hospital.

The worker, identified by the New York Times as Wally Camara, 49, died of his injuries.

While Guzman was formally arrested Wednesday on charges that include Camara’s murder and attempted murder of a police officer, the holster policy of the nation’s largest metropolitan police force is being questioned.

The holster that Guzman was able to defeat was an older model, as noted by ABC7, and was quickly exploited. While new recruits are issued a SafariLand 6360 ALS, described as a Level III retention holster with an automatic locking system by the manufacturer, most on the force have legacy holsters with lower retention levels.

“Obviously we are going to review all the tactics involved. But looking at the video, Mr. Guzman made a very fast move and basically ripped the gun from the officer’s holster,” said Nikunen.

A 2008 Rand Corporation review of the NYPD’s training program found that no one holster was standard, recommended one that allowed secure retention when a weapon is holstered and observed two instances in which trainees were rated “fair” and “unacceptable” during role play that involved outsiders getting a hand on the trainee’s firearm.

Retired NYPD Lt. Daniel Modell, who used to work in the department’s firearms and tactics section, told the New York Daily News the most common holster in use on the streets of the Big Apple are Safariland No. 2955s, a Level II design that he contends was unwanted by other large departments.

“The LAPD didn’t think it was a good holster 20 years ago, so the NYPD got them for a bargain,” said Modell.

“It has a cheap snap, and the retention mechanism is crappy,” he said. “I had to replace it twice. One guy I knew had to replace his holster six times.”

While veteran officers can request the newer holster design, and new recruits since 2014 are issued one at the academy, only about a quarter of the NYPD’s 35,800 uniformed officers are so equipped.

This comes as the city has shown off an impressive array of new military-grade equipment including a $7.5 million buy for 20,000 ballistic helmets and 6,000 NIJ Level III ballistic vests billed as being needed for counter-terrorism purposes. The latest allocation comes in addition to some $320 million, mostly in federal grants, received by the NYPD for everything from M4 rifles, armored vehicles, tactical escape hoods and belt-worn trauma kits in the past three years.