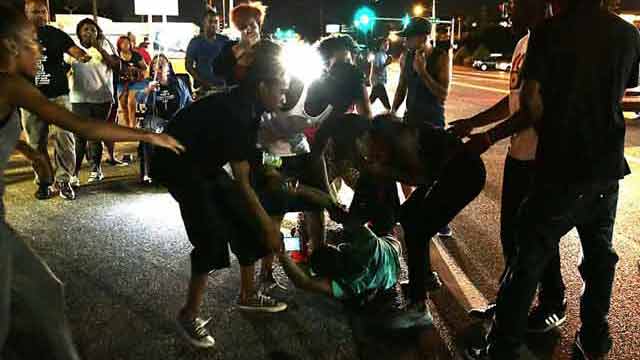 Witnesses at the scene rushed the injured man to the hospital before paramedics arrived. (Photo: Robert Cohen / St. Louis Post-Dispatch)

A demonstration held in Ferguson, Missouri, Tuesday night, on the two-year anniversary of Michael Brown’s death, ended in gunfire after a woman accidentally ran over a protester.

Approximately 75 to 100 protesters were gathered on the side of West Florissant Avenue just after dark, but one protester stood in the middle of the road despite previous warnings from authorities to get out of the street.

A white Chevy Impala can be seen in the video driving down the road, and in a split second, the protester is struck by the vehicle with such force that he was tossed into the air, then dropped on the side of the road like a rag doll. Screams were immediately heard and the crowd gathered around the injured man.

About a minute later, the Impala drove by again, and almost instantaneously a barrage of gunfire was heard. Protesters scrambled for cover, with some wrongly believing they were the target.

Moments later, police and paramedics arrived on the scene, but by that time, according to reports from the St. Louis Post-Dispatch, witnesses had already taken the injured protester to the hospital. Authorities believe they identified the man, but his name has not been made public. His condition is not known.

Authorities learned that two vehicles were struck by gunfire, the Impala and another car stopped at a nearby traffic light, but no one in either vehicle was injured. Ferguson Police Chief Delrish Moss said the Impala was struck at least 10 times, and police believe there was more than one gunman, as bullets reportedly came from multiple directions.

The driver of the Impala, who has not been named, later told investigators that she was distracted by the protesters on the side of the road and did not see the man standing in the middle of the street until it was too late. She said she returned to the scene, but gunshots rang out and her car became encompassed by angry people. Fearing for her safety, she said she again left the scene and drove to a nearby gas station where she called the police and informed them of what happened. Likewise, the driver of the second vehicle that was struck by gunfire also left the scene, seeking a safe location to contact the police.

Officials said the incident is still under investigation, but preliminary evidence backs the woman’s claim that it was an accident. Moss said no charges are expected to be filed against the driver of the Impala and their primary focus is on locating the individuals who opened fire during the incident.