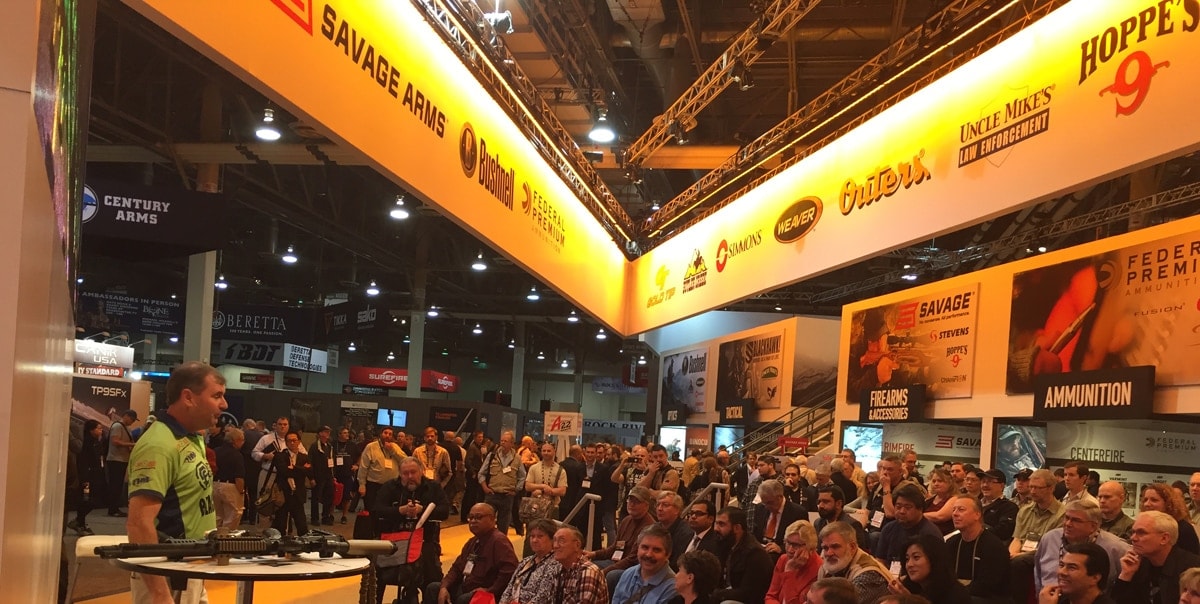 Vista pro-shooter Todd Jarrett, left, waxes poetic in front of a crowd during a demonstration at SHOT Show in Las Vegas in January 2016. (Photo: Daniel Terrill)

Vista Outdoor reported a 23 percent increase in overall sales in its first quarter, including a jump in shooting sports sales by more than $10 million, according to Thursday’s filings.

Of the $630 million in sales, the Utah-based company raked in $342.8 million with gun and ammo companies under its wing like Savage Arms and Federal Premium.  In all, shooting sports made up 54 percent of total quarterly sales.

Vista’s first quarter saw a strong demand for shooting products and gross profit was primarily driven by an increase in volume and price in rimfire ammo, according to the filing. Centerfire ammo, on the other hand, saw a decrease because of lower international sales.

Last week, competitor Sturm, Ruger & Company reported a 19 percent jump in quarterly earnings, putting sales at $140.1 million and $341.1 million six months into the year. Ruger credited an increase in industry demand, demand for new products, and an increase in production.

Another competitor, Smith & Wesson, has also maintained a healthy balance sheet so far this calendar year. The Massachusetts company closed out its last quarter 22.2 percent up from last year, raking in $221 million. Like Vista, Smith & Wesson has been expanding into outdoor goods in addition to shooting sports.

The industry’s key indicator for gun sales, the federal background check system, showed an increase of 15 percent for total checks in the past four months. According to figures published by the National Instant Criminal Background Check System, six months in, 2016 has netted 32 percent, or 3.4 million, more checks than 2015 and continuing a pace for the biggest year on record.

Vista reaffirmed its financial goals for 2017, estimating final sales to be $2.72 billion to $2.78 billion.