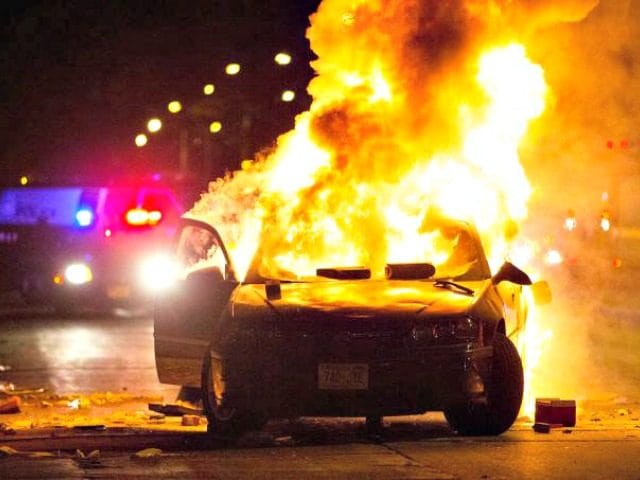 A car was set on fire during protests in Milwaukee over the police shooting of a 23-year-old man. (Photo: Milwaukee Journal Sentinel via AP)

The city of Milwaukee erupted into violent protests after police fatally shot a 23-year-old armed with a pistol earlier on Saturday.

Flames lit up the night sky as six businesses and one car were set on fire. Nearly 800 residents turned out to protest the day’s shooting after a social media post urged Milwaukeeans to demonstrate and rally against police.

The incident that sparked the night’s violence occurred earlier in the day around 3:30 p.m when officers stopped a car driving down a north-side neighborhood. Two occupants in the car leapt out of the vehicle and led police on a foot chase.

During the pursuit, an unidentified officer shot and killed one of the suspects, a 23-year-old Milwaukee resident. The suspect was carrying a semiautomatic handgun previously reported as stolen in March.

The second man who fled the car was eventually caught and is currently in police custody.

Milwaukee Police Assistant Chief Bill Jessup said the exact details of the shooting were unclear, including whether the suspect shot at the officer. No police were injured in the pursuit.

“That officer had to make a split-second decision when the person confronted him with a handgun,” Jessup said. “This is a risk they take every day on behalf of our community.”

Nefataria Gordon told the Milwaukee Journal-Sentinel that she knew the man killed by police and his kindness was the reason behind Saturday evening’s protests.

“He was a nice, good person. He was really respected. That’s why everyone came out. They’re angry,” said Gordon.

Alderman Khalif J. Rainey told The New York Times there’s an obvious air of frustration in the community and that Saturday’s shooting stoked that fire.

“The black people of Milwaukee are tired,” Rainey said, adding, “They’re tired of living under this oppression. What has happened may not have been right.”

“I’m not justifying that, but nobody can deny that there are racial problems here in Milwaukee, Wisconsin, that have to be rectified, because if you don’t, you’re one day away,” he said.

Milwaukee police battled gunshots, fires and rocks thrown from demonstrators. One officer was injured and taken to an area hospital after a brick was thrown through a squad car window. The officer was struck in the head.

Mayor Tom Barrett pleaded with citizens to stay indoors and keep their kids at home.

“If you love your son, if you love your daughter, text them, call them, pull them by ear and get them home,” Barrett said during a press conference with reporters.

“Following a request from Milwaukee County Sheriff David Clarke, and after discussions with Milwaukee Mayor Tom Barrett and Adjutant General Donald Dunbar, I have activated the Wisconsin National Guard to be in a position to aid local law enforcement upon request,” a statement from Walker read. “I join Milwaukee’s leaders and citizens in calling for continued peace and prayer.”