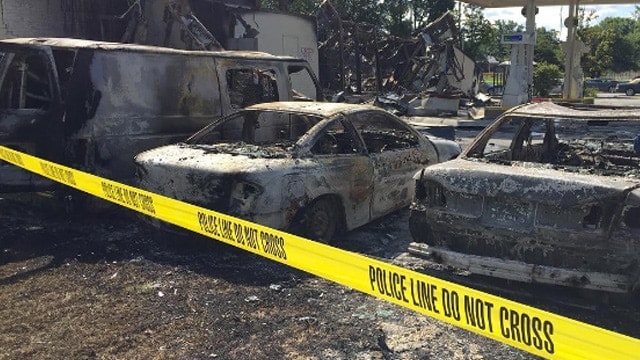 The BP gas station destroyed in the fires. (Photo: Instagram/tvryanyoung)

Federal law enforcement has offered a reward up to $10,000 for information on those responsible for commercial fires set amid protests in Milwaukee over the weekend.

The Bureau of Alcohol, Tobacco, Firearms and Explosives listed eight business that were torched when protests of a police shooting turned violent on Saturday and Sunday. ATF said estimated losses are in the several millions. The businesses include:

“Last night was unlike anything I have seen in my adult life in this city. I hope I never see it again,” said Milwaukee Mayor Tom Barrett about the riots.

The officer involved shooting happened after traffic stop Saturday afternoon escalated. Two men in the car ran from police, so police followed suit. Authorities say the man who was fatally shot had a gun and refused to put it down.

Barrett said he has not seen bodycam video from the incident, but did see a still photo extracted from it that shows the suspect holding a gun.

On Sunday, Wisconsin Gov. Scott Walker activated the National Guard to aid the city at the request of local law enforcement.

ATF has asked anyone with information about these fires should call the toll free ATF hotline at 888-ATF-FIRE (888-283-3473). Callers may remain anonymous.