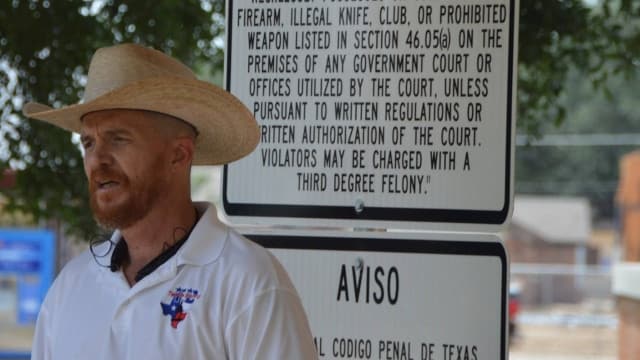 Terry Holcomb’s fight against Waller County Courthouse’s gun free zone has brought him a $100K lawsuit from the county DA and the support of the state attorney general. (Photo: Valentine Gonzalez/Open Carry Texas)

Texas Attorney General Ken Paxton has weighed in on the fight between a carry group and Waller County, who sued a Second Amendment activist after he questioned their gun free zone.

In May, Texas Carry Executive Director sent Waller County officials a registered letter arguing the “no guns” signs posted at the county courthouse were illegal under Texas law, asking that the signs be removed within three days saying, “In the event the signs have not been removed I will proceed with requesting all remedies available under the law.” Holcomb copied the Paxton’s office on the letter.

This resulted in the unusual step taken by Waller County District Attorney Elton Mathis to sue Holcomb on July 6, holding the law is on the county’s side and asking a state court for a judgement against the advocate that could top $100,000 in damages. In his filing, Mathis argued the attorney general doesn’t have proper mandate to take action against the county and the gun free zone is proper as the building in question contains court offices among others.

“[T]he Penal Code does not allow a political subdivision to prohibit licensed handgun holders from entering into an entire building simply because the courts or the offices of the courts are located in a portion of that multipurpose building,” wrote Paxton in a letter dated Aug. 10. “Consequently, the OAG has determined the signs posted outside the entrances to the courthouse are in violation of the Government Code.”

As such, the AG directed the signs be removed within 15 days under threat of a fine of up to $15,000 per day they remain on the 16th, noting that, “each day of a continuing violation constitutes a separate violation.”

Texas Carry, along with Open Carry Texas held a protest rally last weekend at the Waller County Courthouse against both the suit, which local newspapers have described as “intimidating and unjustified” in editorials, and the enduring gun free zone itself. The group noted on its Facebook page that even if Mathis drops his suit against Holcomb, they intend to proceed with a counter suit against the county on First Amendment grounds.