The gun control group conducted their demonstration at BlackRock in New York City in an effort to shame them for investments in Smith & Wesson and Ruger.

BlackRock, who bills itself as the world’s largest asset manager and is publicly traded, has some $4.9 trillion in assets– a healthy slice of that in gun stocks.

This, argues GAG, is patently wrong.

What’s venal about investors like BlackRock is that they’ve said in annual reports that gun manufacturing is a growing market. After every mass shooting, the NRA stokes a run on gun sales, these companies buy more stock—it’s a disgusting, amoral cycle,” GAG Spokesman Tim Murphy told Vice in an interview.

“The NRA gets paid to be the industry’s public whipping boy, but you have to chase it all the way back. That’s why we took it to BlackRock,” says Murphy. “It’s a bland corporate entity that prides itself on its A+ rating from the Human Rights Campaign and donates to candidates like Hillary Clinton. They have this gloss of progressivism, and we showed up today to say you’re not a friend of the LGBTQ community or progressive if you’re profiting off death stocks.”

To call attention to the firms investments, GAG staged a “die-in” Monday with chalk outlines and popcorn– as a reference to the Aurora, CO theater shooting– as 12 members stood in silence. 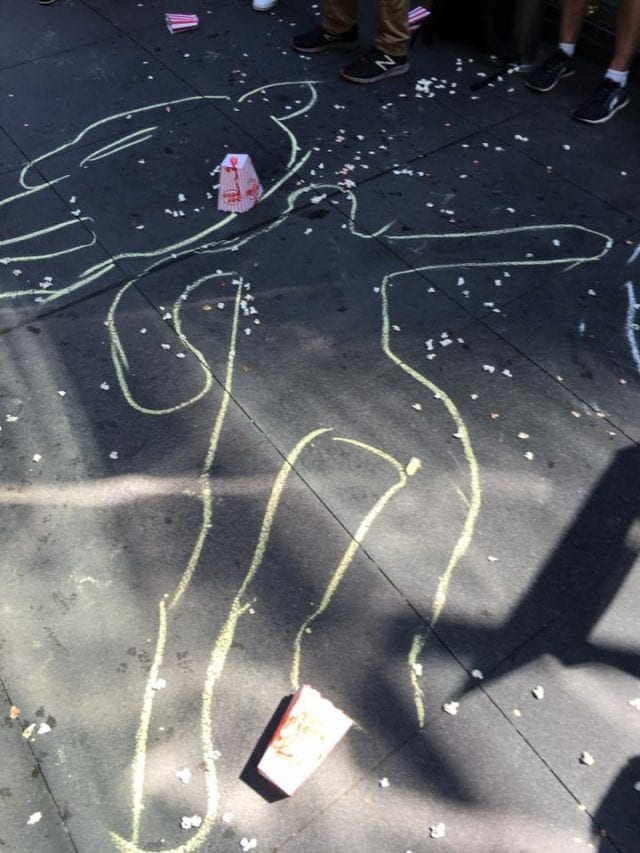 The company argues they take corporate responsibility and the gay community seriously.

“BlackRock values diversity and has a history of supporting the LGBT community,” the company said in a statement as reported by Bloomberg News. “We condemn senseless acts of violence in any form including the recent tragedy in Orlando.”

Further, they offer some funds that do not trade in “controversial” stocks such as tobacco and firearms companies.