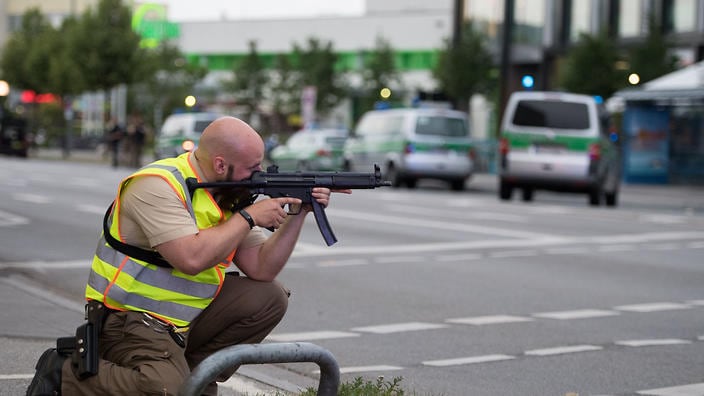 Police officers point their weapons outside the Olympia mall in Munich, southern Germany, Friday, July 22, 2016, after several people have been killed in a shooting. (AP Photo/Sebastian Widmann)

German authorities on Tuesday said they had arrested a man suspected of illegally selling the gun used in a deadly mass shooting in Munich last month.

Bought on the so-called “darknet,” or the majority of the internet, which is not accessible by a majority of users and requires some know-how to access, police had set up a sting operation to ferret out the culprit.

“The internet is not a space that is beyond criminal prosecution,” said German Federal Police official Holger Münch last month during a press briefing about the agency’s darknet operations.

As reported by German media company Deutsche Welle, the 31-year-old man was arrested by the Bavarian Criminal Police Office in connection with the shooting perpetrated by an 18-year-old German-Iranian man at the Olympia shopping mall on July 22.

The shooter was said to have bought the gun, a semiautomatic Glock 17, on the black market before killing nine people, injuring 36 others and finally turning the gun on himself July 22.

The alleged seller of the Glock was caught in a sting operation north of Frankfurt, in the town of Marburg, DW reported.

According to DW’s reporting, the German Federal Police Office documented some 45,000 cases of cybercrime directly linked to Germany worth an estimated $45 million.