Brooklyn Borough President Eric L. Adams joined with others this week to debut a contest for colleges and universities in New York City to create technology to prevent unauthorized users from firing a gun.

Allied with the Mayor’s Office of Criminal Justice, New Yorkers Against Gun Violence, the New York City Police Department and the Smart Tech Challenge Foundation, Adams is pledging to give $1 million in capital grants from his office to the team that develops the best smart gun.

Adams feels increased use of smart guns will help curb both accidental gun deaths and use of stolen firearms by criminals.

“This is a great opportunity to further the conversation around gun related deaths and how technology can alleviate these issues,” said Adams in a press conference. “We want the free flow of ideas coming from all aspects of the public.”

Teams can register to enter the competition between Sept 1, 2016 and Jan. 1, 2017.  Schools from any of the five boroughs can compete and can have as many teams as they like but must contain one graduate student or professor on each team. The deadline for entry submission is June 1, 2017.

Once submitted, a committee will pick the five best ideas and allocate $10,000 to each of those semi-finalist teams whose schematic idea will be reviewed by the NYPD. The designs will be evaluated for safety, ease of adaptability to the market, feasibility and flexibility.

Adams says the competition has already brainstormed three areas of interest in personalized handguns: a smart phone app to find lost or stolen guns, firearms with fingerprint biometrics and RFID technology such as a ring worn by the user. But he cautioned these initial ideas are just the tip of the iceberg.

“Embracing other concepts such as microstamping and other technologies that are out there, we can create an environment where gun ownership will not be trampled on but the rights of people living in a society free from gun violence will be preserved and protected,” said Adams.

The winning team, to be announced sometime in the summer of 2017, would be awarded $1 million in capital budget allocations from Brooklyn Borough President’s office.

The $50,000 in seed money will likewise come from Adams’s discretionary fund. 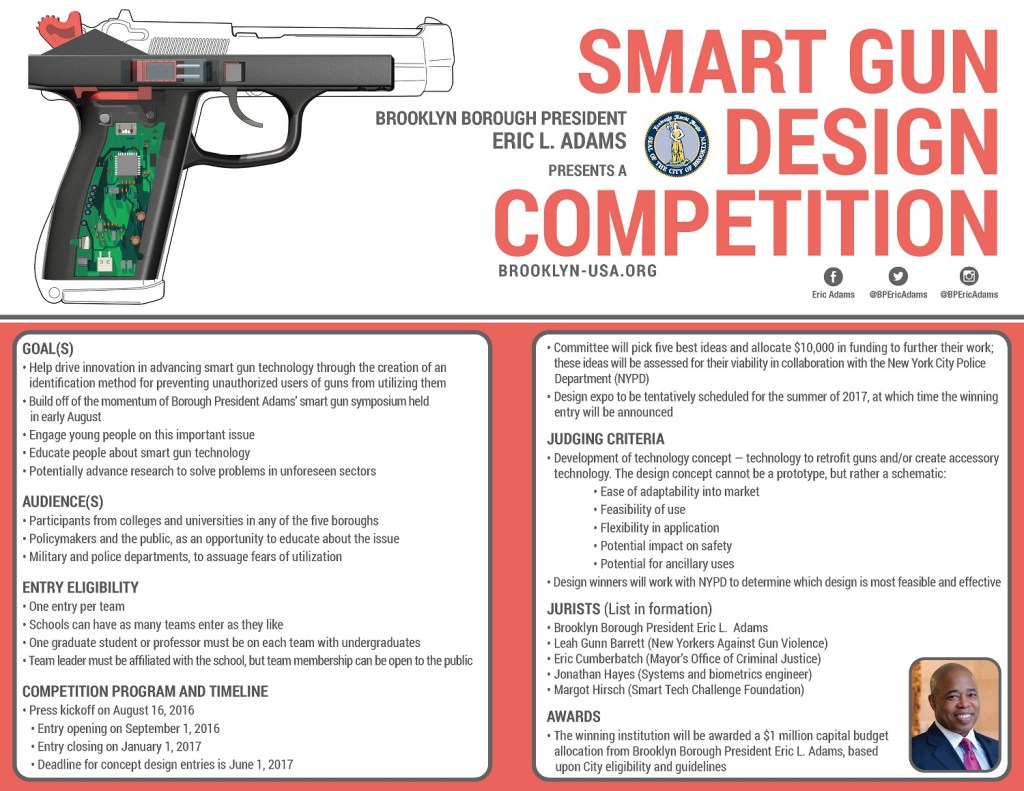