CT businessman’s plans for FFL shot down by zoning commission 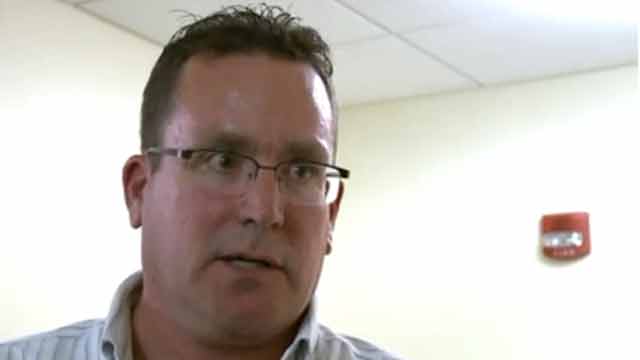 Anthony DeLucia believes decisions are being based on emotions, not facts. (Photo: Fox 61)

A man in Rocky Hill, Connecticut, left a town meeting Wednesday disappointed after his plans to obtain a Federal Firearms License were promptly shot down by the zoning commission and members of the community.

Anthony DeLucia is a Certified Public Accountant who owns the business DeLucia & Co LLC. The business is located in the center of town and DeLucia wants to use a portion of his building as a Federal Firearms Licensed gun dealer. This week was the second time DeLucia has approached the Rocky Hill Planning and Zoning Commission, and the second time his plans have been shot down.

Rocky Hill Congregational Church Rev. Craig Cowing noted in the town hall meeting that DeLucia’s business is located near the town office, the historical society, a church and a daycare. He said a firearms business in the neighborhood is simply “inappropriate” and “out of character.” In fact, Cowing said he would like to see the entire town become a “gun-free zone.”

“We don’t need any business anywhere in Rocky Hill that sells firearms,” said one member of the community during the town hall meeting.

“I am totally against it,” said another.

“I am fully, fully against this,” echoed a third.

The overwhelming response to DeLucia’s proposal was a loud “no,” but he believes the community, as well as the zoning commission, is misinformed and harbors non-factual thoughts on the matter.

DeLucia, who expressed frustration over residents’ willingness to accept First Amendment rights while his Second Amendment rights are being denied, explained that he’s not looking to open a gun shop as the community believes. As an FFL dealer, DeLucia would act as a sort of middle man for individuals looking to purchase firearms elsewhere, like over the internet. If someone purchases a gun, the gun will be shipped to DeLucia who, in turn, will deliver the gun to that individual.

DeLucia already has an FFL for his home, but he wanted to obtain one for his business because that’s where he spends the majority of his time. It was more of a matter of convenience for him. And it’s all perfectly legal, just not conducive to what the commission wants for the town.

“There wasn’t to be any retail operation, or anything of that nature, it would have presented no potential harm to the community,” DeLucia told a local Fox affiliate.

He said he believes emotions, in regard to guns and gun control, are running high at this time and many people simply do not have all of the facts. He said he never intended to put guns on display and does not wish to have a large-scale operation.

“Obviously I’m disappointed,” DeLucia said. “I think we had a fully legal application and it was denied on somewhat emotional matters.”

DeLucia will present his plans to the council for a third time, hoping for a charm, and, if denied again, will take his business elsewhere.