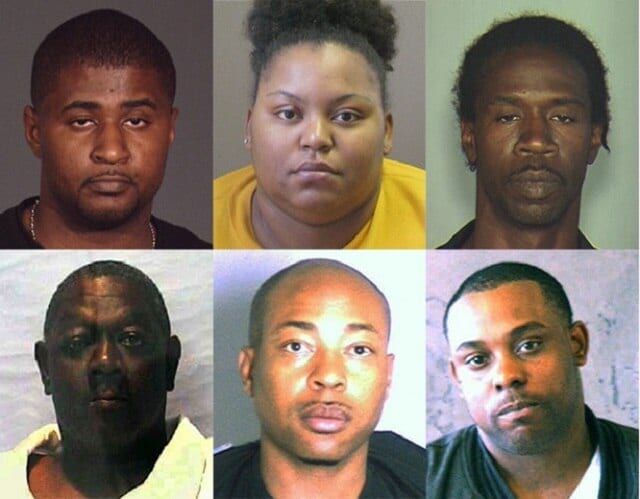 Rodney Brewer, top right, is the last defendant sentenced as part of the six-person “Gun Family” who brought guns from Georgia to Brooklyn via I95. Michael Quick, top left, ran the ring. (Photo: Brooklyn DA’s office)

A Brooklyn judge handed down sentencing this week in the case of a man who helped bring 151 guns from Georgia to sell to undercover New York cops.

According to a release from the Brooklyn District Attorney’s office, Rodney Brewer, 49, of LaGrange, Georgia, made as many as 13 trips in an eight month period between September 2013 and April 2014, shuttling guns, some stolen, northward as part of a ring of six individuals, some related. In addition to taking part in the runs themselves, Brewer was also responsible for purchasing guns in Georgia for transport to New York, where they were flipped at a huge profit, often turning a firearm bought for $200 for more than $1,000.

In all, the group received some $126,000 from undercover officers during the sting, which was named “Operation Lucky 7” by the department.

Ringleader Michael Quick received an 18 year sentence last August while four other defendants who took plea bargains to fourth-degree conspiracy charges, got off with probation or a year in prison. As such, Brewer was the final defendant to be sentenced.

“This defendant and his cohorts tried to make some easy money by flooding our streets with weapons of death and putting lives at risk,” said Brooklyn District Attorney Ken Thompson in a statement. “They have now been brought to justice here in Brooklyn. This case should serve as a warning to out-of-state gun traffickers that we will continue to go after them and hold them accountable no matter where they live.”

The investigation by the New York Police Department into Quick’s ring involved the largest single weapons buy in the history of the department when he sold a suitcase with 25 handguns to an undercover officer for $20,000. In each instance, the lots were sold to the undercover buyer on the corner of Foster Avenue and East 96th Street in the working-class Canarsie residential neighborhood of Brooklyn.

The news comes the same week that New York Attorney Gen. Eric T. Schneiderman announced a 15-year sentence as part of a plea agreement for Natasha Harris, head of a separate Brooklyn-based gunrunning operation that brought 70 firearm from Florida into the city, some secreted under Chinatown buses. A joint AG-NYPD sting, named “Operation Midnight Run,” resulted in the arrest of eight members of the ring in 2014.

“Natasha Harris led a dangerous gun trafficking ring that used Chinatown buses as a method to bring guns into our communities and fuel the epidemic of gun violence,” Schneiderman said. “Today’s guilty plea sends a clear message– if you bring deadly illegal weapons into our state, we will catch you and prosecute to the fullest extent of the law.”

Two further members of the ring indicted in the Midnight Run bust, Octavio Batista and Michele Cantres have been sentenced to 12 and 7 years in prison respectively.

This ring is not to be confused with that of a different 8-person conspiracy busted in 2015 that also used Chinatown buses for transport to illegal gun sales to NYPD undercover buyers. In that effort, police paid $130,050 for 112 guns in a series of deals made at a Walgreens parking lot on Rockaway Parkway in Canarsie.