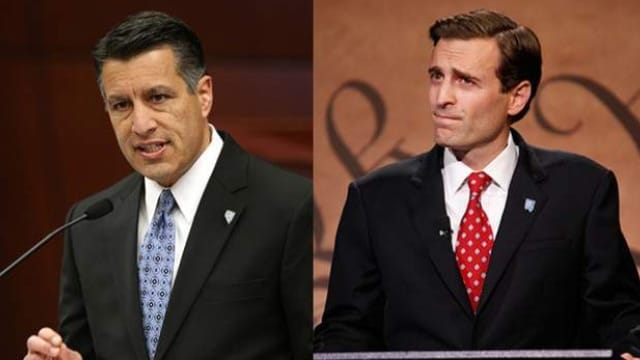 Republicans Gov. Brian Sandoval and Atty. Gen. Adam Laxalt are both against a ballot question in front of Nevada voters this November on expanded background checks for gun owners. (Photos: Las Vegas Review-Journal)

Gov. Brian Sandoval and Atty. Gen. Adam Laxalt have publicly decided not to support a Bloomberg-backed voter referendum to expand background checks on guns to cover most private transfers.

In a statement issued Wednesday through the National Rifle Association, who is leading a “Vote no on Question 1” campaign, Laxalt voiced concern over the initiative.

“As the state’s chief law enforcement officer, I take seriously my duty to ensure that my fellow Nevadans are safe,” said Laxalt. “I have carefully reviewed the Question 1 initiative and have concluded that it would not prevent criminals from obtaining firearms and would instead cost Nevadans time, money, and freedom.”

With his remarks, the AG followed in the wake of a similar proclamation by Republican Gov. Sandoval last week expressing the “measure would dilute the legitimate rights of law abiding Nevadans and that it does not actually address the complex issue of keeping firearms out of the hands of criminals.”

For his part, Sandoval vetoed a bill sent to him by the legislature in 2013 that would have accomplished much the same expansion.

Earlier this month 14 of the state’s 16 elected sheriffs came out in opposition to the measure, with some voicing concerns that it did nothing to address mental health concerns.

One notable hold out is Joe Lombardo, sheriff of Clark County and head of the Las Vegas Metropolitan Police Department, who has said he will remain neutral on the issue– though his second in command, Undersheriff Kevin McMahill, told KNPR two weeks ago that, if approved, the ballot referendum would likely not reduce gun deaths.

“Our shootings aren’t occurring because we have great citizens that are involved in these types of things,” said McMahill. “These are people who are out there committing a number of crimes and using more often than not stolen firearms, firearms with obliterated serial numbers, firearms that they trade in the drug world. These are not legal firearms being used in the murder of 101 people for the most part. There are some but I don’t think, personally, that background checks are going to have an significant impact on that.”

Representatives with the ballot campaign argue that Sandoval and Laxalt are politicizing the issue without looking at the data.

“When politicians oppose Question 1 they ignore facts and research which is clear: background checks work,” Jennifer Crowe, communications director Nevadans for Background Checks, told Guns.com in an email.  “In recent years background checks have stopped gun sales to more that 5,300 felons, domestic abusers and other dangerous people right here in Nevada. This is a public safety measure that has the support of thousands of Nevada law enforcement officers and the vast majority of Nevadans–including gun owners–because it’s our right to protect ourselves, but it’s our responsibility to keep guns out of the hands of criminals.”

Elsewhere, Maine Gov. Paul LePage, like Sandoval an NRA “A” rated Republican, is a vocal opponent of a Bloomberg-sponsored background check voter initiative in that state.

“It’s nothing more than a way to force Mainers to have a directory of gun owners,” LePage told a town hall forum in late July. “It’s unconstitutional, and let me tell you why: The citizens of the state of Maine have the right to own or bear arms, and it shall never be questioned.”