CCL-holder chooses not to fire back during violent encounter 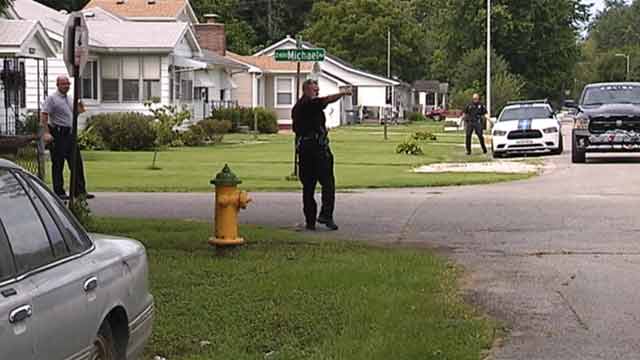 Police look over the scene after the violent encounter. (Photo: Tri-State)

A legally armed citizen in Evansville, Indiana, was faced with a split-second decision after a meeting turned violent and ended in gunfire. Despite being shot at, the man chose not to shoot back, thinking first of the safety of the child who was with the man shooting at him.

Kiyel Langley and his girlfriend, Amber Martin, were set to meet Martin’s ex-boyfriend Thursday morning around 10:30. Martin and her ex, who did not wish to be identified, have a child together and agreed to meet in the parking lot of a shopping center, local media reported.

But when the meeting occurred, an argument ensued which quickly led to a physical confrontation. Trying to remove himself from the situation, the ex-boyfriend called his father to come get him. When the man’s father arrived, Langley and Martin – who had the child in the car with them – pulled up behind the father in an attempt to continue the fight.

The argument restarted and Langley pulled out a revolver and opened fire on the ex-boyfriend. The ex, who was also carrying a gun, chose not to fire back at Langley for one simple reason – his child was in the car driven by Langley and Martin.

Instead of grabbing his gun, the ex-boyfriend grabbed his phone and dialed 911. As he was dialing, Langley fired off his last round from his revolver, then fled on foot, ditching his gun somewhere along the way. Martin drove the car away from the area.

Officers arrived on the scene a short time later and quickly apprehended both Langley and Martin, thanks to witnesses who gave accurate descriptions and pointed them in the right direction.

Langley was charged with attempted murder, while Martin is facing charges for assisting a criminal.

Authorities confirmed that the ex-boyfriend is a legal gun owner with a valid license to carry concealed. They were also quick to praise him for his split-second decision making.

“It does appear that he used a lot of good, common sense and wisdom by choosing not to fire,” said Evansville Police Captain Andy Chandler. “Even after the shots were fired and the suspect took off running, the [victim] that had a legal carry permit once again chose not to fire at the suspect because he felt like he was no longer in danger because the suspect was running from the scene.”

The man said he now fears retaliation and knows when and if Langley is released from jail, he will come to the man’s house seeking revenge.