Mass. AG releases new info on 'guns that are not assault weapons' 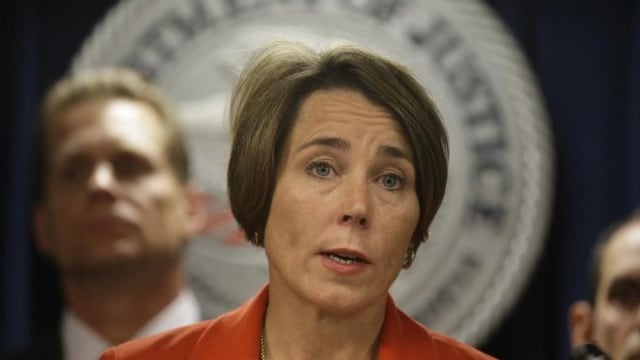 In what some gun rights advocates are calling a confusing development, Attorney General Maura Healey attempted to further clarify her reinterpretation of the state’s assault weapon ban.

In July, Healey announced her office was ratcheting up enforcement of the Commonwealth’s ban by targeting guns whose actions are similar to AR-15s and AK-47s but meet current cosmetic requirements such as being sold without features such as a flash suppressor, bayonet lug or telescoping stock. She contends as many as 10,000 such rifles were sold in Massachusetts in 2015.

Since then, her unilateral change has sparked confusion among gun dealers, legislative inquiry into her actions and promised litigation from the firearms industry. Even Gov. Charlie Baker and his Secretary of Public Safety and Security Daniel Bennett questioned the policy change citing fears law-abiding gun owners may inadvertently end up criminalized.

In an apparent effort to throw more light on just what is and is not considered an assault weapon by her office, Healey this week posted information entitled “Guns That Are Not Assault Weapons” on her site in which considers exempt:

The updated guidance goes on to clarify that guns classified as assault weapons cannot be modified to fire .22 caliber ammunition to make them acceptable.

The clarification comes just days after Healey publicly addressed contentions that her guidance was confusing in her regular monthly appearance on Boston Public Radio’s “Ask the AG” segment.

The Gun Owners’ Action League, which has been organizing rallies in protest of Healey’s actions in the past several weeks, holds the new information only muddies the waters even more.

“Upon viewing the page there are many new questions, which make this untenable situation increasingly murky,” reads a statement from the group.

GOAL points out that Healey states rifles in .22 caliber are acceptable but there is no clarification as to if the statement includes both rimfire and centerfire chamberings.

They are further puzzled by the exclusion of the “Ruger Mini 14 or substantially-similar model weapon” saying that, “virtually every semi-automatic magazine fed rifle is substantially similar to the Mini 14.”

Indeed, the Mini-14 uses a rotating bolt which was very similar to that of the M1 Garand — that is not considered an assault rifle by Healey’s office — while the same type is also used on the Springfield M1A, which is.

“This is disturbing considering that Healey has threatened gun owners not in compliance with a ten-year felony charge for transferring items that are legal to transfer according to Mass General Law,” notes GOAL.