Army sergeant forced to rebuild his gun before match in Rio 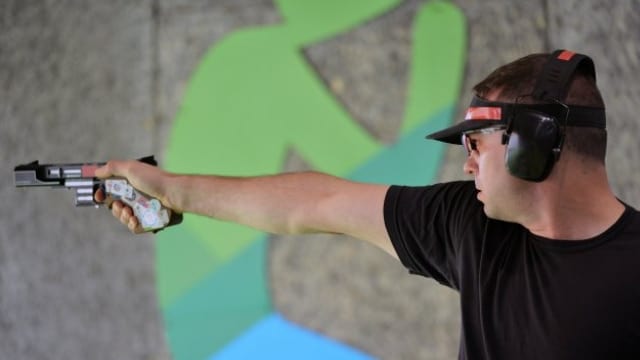 In the Rapid Fire pistol match, Sgt. Sanderson shown, competitors have to fire unsupported with one hand at targets 82 feet away. Strings are as short as five rounds in four seconds. Scores outside of 9.7 are generally considered to be a “miss” (Photo Tim Hipps/U.S. Army)

Sgt. 1st Class Keith Sanderson, a San Antonio native stationed at Fort Carson, Colorado had to make emergency repairs to his gun to replace a faulty trigger while competing at the Olympics

A marksmanship instructor and member of the U.S. Army’s World Class Athlete Program, the 41-year-old Sanderson was an Olympian competing in the 25-meter rapid fire pistol event at the Rio Olympic Games this month.

Then Murphy showed up and his electric trigger died (smart gun users take note). In an Olympic-quality rapid fire match, learning to memorize a trigger is everything.

This put Sanderson to work.

“I didn’t just switch guns before the competition,” Sanderson said. “I put the barrel, grip, primer and bolt from my primary gun on my backup gun,” Sanderson explained. “Despite all that, I do feel like I went into the match very healthy — the strongest I’ve ever been as far as shooting.”

In the multi-stage event, he was one point away from advancing to the finals.

In the end, Sanderson finished a very respectable ninth place with a score of 290 in stage one qualification. Germany’s Christian Reitz, the current world record holder in the event, picked up the Gold.

More images of Sanderson in competition below: