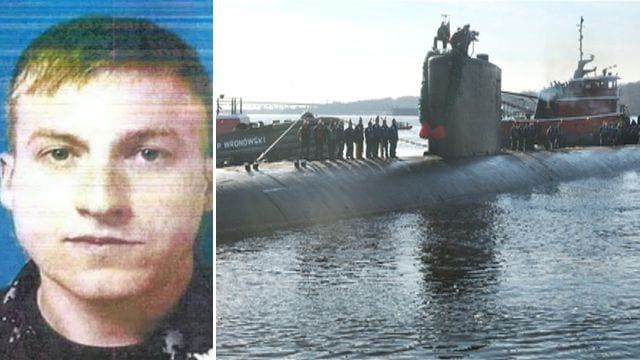 U.S. Navy MM(N)1 Kristian Saucier, 29, is set to serve a year in prison for six photos found on his cell phone taken in classified areas of his submarine. (Photo: Composite U.S. Navy)

A Navy enlisted man found with snapshots of his submarine’s classified propulsion system and argued his crime is less than Hillary Clinton’s email scandal picked up a year in prison.

Last July, Petty Officer First Class Kristian Saucier was charged with unauthorized retention of defense information and obstruction of justice after a cellphone with 12 images of control panels and a portion of the reactor compartment of a nuclear attack submarine were found on a phone identified as being his was found at a waste yard in Connecticut.

After investigation, federal agents were able to ascertain that Saucier took the photos between January and July 2009 while stationed as a Machinist Mate on the USS Alexandria and that at least six showed details of the submarine that would be classified as Confidential or Restricted.

Facing as much as 30 years in prison and fines of $500,000, Saucier plead guilty in May to a single count of unauthorized possession and retention of national defense information. In the lead up to his sentencing, his attorney argued the Sailor should be granted probation rather than thrown in jail, while the Chief of Naval Operations’ office asked he receive “on the high end” of the sentencing guidelines for Saucier’s conviction, 63 to 78 months.

In the end U.S. District Judge Stefan R. Underhill from his bench in Bridgeport gave Saucier jail time, 12 months of it, followed by three years of supervised release. While on supervised release, the Sailor, facing administrative separation from the Navy, must spend six months in home confinement with electronic monitoring, and perform 100 hours of community service.

As part of the quest for a lighter sentence, Saucier’s lawyer, Tully Rinckey, asked for leniency, holding Saucier never intentionally shared the photos with anyone, that they were not taken maliciously, that other Sailors on the same vessel who had done the same thing were not brought up on charges, and, finally, that Hillary Clinton’s email server contained many more classified documents, many to a much higher degree of classification, and she was not charged.