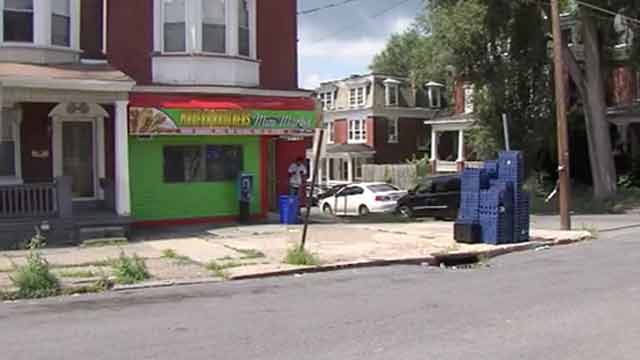 The family has owned the store for less than a year and already been robbed twice. (Photo: ABC 27)

A young man stood up against an armed robber who attempted to take cash from his mother’s store at gunpoint in the Allison Hill area of Harrisburg, Pennsylvania, last week — the entire ordeal captured on camera.

Daneurys Santo, 19, was working at the Madera Bros. mini market Wednesday night when a tall, black male entered the store around 8:40 p.m. He was wearing a mask and carrying a revolver.

A female customer was standing at the counter, in the process of paying for her items, when the attempted robbery unfolded. The shocked customer stepped away from the counter as the suspect demanded cash from the clerk, first in English then in Spanish. The woman backed up and appeared to be dialing on her cell phone, presumably to the police, as she slowly made her way to the door.

Just moments after the women was through the door, Santo pulled out a shotgun from behind the counter and opened fire on the suspect. The suspect promptly made his way out of the store, nearly knocking down the female customer in the process. Santo gave chase to the suspect, but he got away.

While making his escape, the suspect dropped his hat and left a small trail of blood, which authorities discovered when they responded to a silent burglar alarm shortly after the robbery began and soon washed away by the rain. The suspect was not immediately found.

Kevin Moon is a local resident who frequents the corner store. He told reporters he was shocked to hear about the robbery attempt and said Santo is a good guy. Moon added he’s glad Santo and his mother weren’t injured, but also glad Santo didn’t kill the suspect. Santo and his mother, who was also in the store at the time of the attempted robbery, were both uninjured.

Santo said this is the second time in less than a year the store has been targeted by robbers. The first time his mother was working behind the counter when she was robbed of about $600 in cash, but the suspect left empty-handed this time. And if placed in the same position, Santo said he would react the same way.