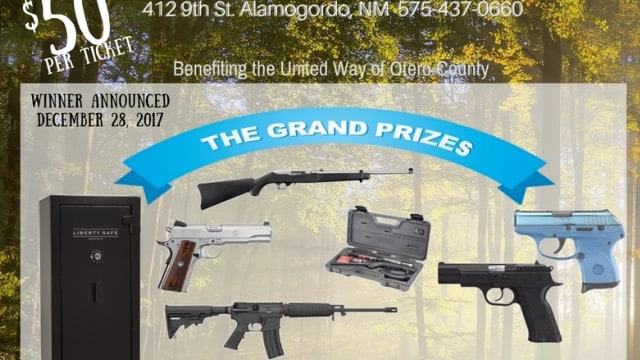 A New Mexico chapter of the United Way has come out on top in a battle with a local anti-gun group over a raffle program to give donators a chance to win one of 108 firearms.

The United Way of Otero County, based in Alamogordo, planned a 2017 Calendar Raffle in which a number of guns would be given away as prizes throughout the year. The firearms to be raffled encompass a wide variety of types ranging from a Barrett M95 .50 BMG rifle to be given away in January to an H&R 12 gauge hunting shotgun in September and a Heritage Rough Rider .22LR single action revolver in February.

At $50 a ticket, the group hoped to raise some $150,000 through the donated guns while stressing that all state and federal laws had to be met and the firearms won would be transferred through the Western True Value of Alamogordo, a licensed firearms dealer.

This didn’t sit right with New Mexicans to Prevent Gun Violence. The group has made news in the past by advocating a Guns to Gardens program in which firearms are converted to lawn tools and by arranging murals to end gun violence. The gun control advocacy organization penned a letter to United Way Worldwide protesting the raffle, which caused the parent organization to demand that Otero County halt the event.

“When we found out about this raffle we sent a letter to the president of who put a stop this nonsense,” noted NMPGV on its Facebook page Aug. 5.

The United Way chapter temporarily halted its raffle program while it consulted with its attorney, and the gun control group celebrated its victory with New Mexicans to Prevent Gun Violence co-president Miranda Viscoli telling the Alamogordo Daily News the fundraiser was out of line.

“The mission of the United Way is to mobilize the power of communities worldwide and to advance the common good,” said Viscoli. “They were raffling off an AR-15 assault weapon. Those AR-15’s are designed for one thing — to kill as many people as quickly as possible. It has nothing to do with that mission.”

However, reports of the raffle’s demise soon turned premature as the president of the United Way of Otero County, Josh Beug, told the Daily News last week the event was green-lighted once again with a few tweaks and had the sanction of the parent organization.

“We’re fine with them,” Beug said. “We’re back on track. They’ve allowed us to continue. We’ve come to terms with them.”

The news isn’t sitting well with the gun control advocates.

Viscoli joined with former CIA officer Valerie Plame Wilson to write an op-ed last published this weekend by the Huffington Post, blasting both the local chapter and United Way Worldwide, arguing the guns, which they term “instruments of mayhem,” could be resold to drug dealers and terrorists.

“Many of us who have supported the United Way for years are deeply embarrassed by and for the organization,” reads the piece.